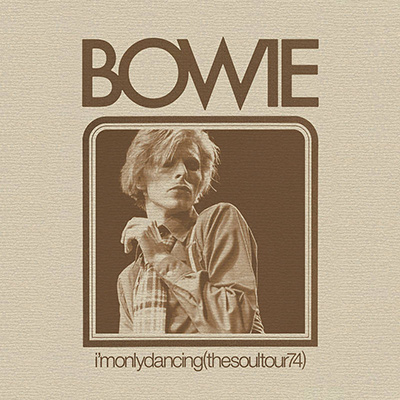 DAVID BOWIE’s camp has been regularly issuing and reissuing some of the man’s concerts for Record Store Day and other events so you gotta wonder how close to the bottom of the barrel they’re getting. Will one bad apple spoil the rest of ’em? I’m Only Dancing (The Soul Tour 74) might just be one of those (possibly) offending apples.

These “legendary,” “mythical” concerts were what basically amounts to Bowie rejigging his band mid-tour – originally dubbed the Diamond Dogs Tour – with additional performers, and changing the arrangements to reflect, I guess, what he was hearing in his head. He dialed up the soul and dialed back the rock – and that is either gonna be a real plus for you (like, if you’re a big fan of Young Americans, recorded soon after) or a let down (like if you prefer David’s rockier, Ziggy-er side). For me, firmly in the latter category, it’s not as great as I had hoped it’d be. I much prefer Cracked Actor (Live in Los Angeles ’74) (issued for RSD 2017, see my review here) for its crunchy arrangements. Here we have near-cheesy keyboards (sorry, Mike Garson, ’cause I generally like your playing) and an at-times caterwauling sax (courtesy of David Sanborn) that sounds pretty dated (think of the theme song for Saturday Night Live). Ugh. On the other hand, I do like the covers medley of “Foot Stompin’/I Wish I Could Shimmy Like My Sister Kate,” with its “Fame”-style guitar stabs. But that sax. You’re killin’ me, Sanborn!

I’m Only Dancing also suffers from a hoarse-voiced Bowie and the recording’s mediocre sound quality. It sounds better than your typical bootleg of the era, for sure, so this is probably an improvement in that regard. Design-wise, this package is miles better than its mid ’70s counterpart, with graphics adapted from the tour program that was available at the shows. The 2LP and 2CD sets are both Record Store Day exclusives so they’re going to go fast. Whether you want to make the trip to your local vinyl emporium is up to you – though you should go and support your local regardless of your interest in this year’s Bowie release. You’ll be able to either pick up a copy of this or something else that’ll float your boat. Let’s not forget, no matter what any of us critics say about any particular DB product, it’s still gonna be better than your average album. It’s Bowie! – Marsh Gooch