ROBYN HITCHCOCK, never content these days to play with any one group of musicians for too long, lest his muse abandon him, conjured up His L.A. Squires last year and was wise enough to capture a gig for posterity. Three songs from their gig at The Troubadour in Los Angeles last May make up this 7″, another winner from YepRoc Records and a Record Store Day “first release.”

“Insanely Jealous” is the A-side, a song Hitchcock originally performed in The Soft Boys (from their stellar Underwater Moonlight album). The B-sides are “I Pray When I’m Drunk” (from last year’s eponymous release, see my review here) and “If You Were a Priest,” the lead-off track from Robyn Hitchcock & The Egyptians’ Element of Light (from 1986). Though none of the arrangements veer very far from Robyn’s originals, it’s fun to hear him sing the songs with a very capable, current combo. I hope there’s a complete album in the offing, as it would make a fine companion to this 45. 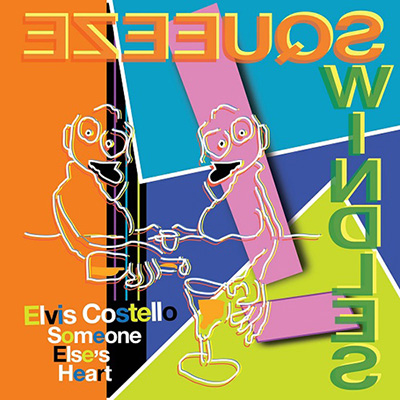 Weird timing for this one. ELVIS COSTELLO (with Roger Bechirian) produced Squeeze’s 1980 album East Side Story. The record was lauded then as a “new wave masterpiece” and it still holds up extremely well, even without the new wave tag. “Someone Else’s Heart” is one of the songs on that record, and it must’ve made quite the impression on EC that he would do his own version 34 years later. Just released for Record Store Day, the 7″ on YepRoc features that on the A-side and an instrumental mix on the B. It’s a more chilling arrangement than Squeeze’s, which relied more on the quirky, Farfisa organ style they’d used on their previous album, Argybargy. Costello recorded this with ?uestlove of The Roots, the “hip hop” band he worked with on the 2013 Wise Up Ghost project, and a few other heavy hitters. What they serve up here has a loping heavy bass line courtesy of Owen Biddle, some gritty guitar from Kirk Douglas and ?’s trademark drumming and loops, and it’s a fine version of the song. Leave it to Elvis to not cover the obvious songs (though “Tempted” would have been pretty interesting, I’ll bet). The instrumental version on the B-side is great for hearing the individual bits the band is playing (especially the clavvy keyboard part from Ray Angry), since EC sings both lead and layered backing vocals on the regular mix that cover some of the nuances of the arrangement.

A worthwhile 45 to pick up, and supposedly available beyond Record Store Day. I originally had this on my “save it for later” list, but my inner Costello fan ghost whispered to me something like, “what if they run out?” and “what if it’s awesome,” so I gave in and got it. You might want to get in on this action, too. Or no action. Your call.