Well, that Australian band that made such a huge splash in the early ’00s has been born again. Yes, I’m speaking of JET. Their debut album, Get Born, has been reissued in a super deluxe set that gives you about as many versions of “Cold Hard Bitch” and “Are You Gonna Be My Girl?” as you could possibly want. Cherry Red’s new 2CD/ 1DVD edition is packed with 35 audio tracks (and nine videos on the DVD) and a fairly informative booklet that make it, at this point, the definitive birth certificate of an album that was so good that there was just no way the young band could follow it up and better it.

Without regurgitating Jet’s pre-birth story, these Melbourne guys adopted their name in 2001 – after their favorite McCartney & Wings song (I like that!) – but sounded more like a Stones/ Who hybrid than a ’70s pop band. They took off with two guitars, bass and drums for an attack that was a definite throwback yet contained something that must have been lacking in popular music in the first decade of the 21st century. I can’t help but think that they were more appealing to dudes my age (I was in my late 30s then) than most people in their own age bracket, but it doesn’t matter much because their hard rockin’ sound grabbed you by the throat with its instant familiarity and freshness, regardless of yer age. Informed in equal amounts by both the classic rock of the late ’60s and the punk rock of the late ’70s, Get Born was a debut album as amazing as Nirvana’s Nevermind from a decade earlier (though that was, indeed, that band’s second record). A few of the songs appeared on Jet’s first release, a 4-song EP called Dirty Sweet, which, if I remember right, includes recordings that are downright soundalikes to the versions here. But since that record was never available here in the States, what we got on Get Born was thirteen dirty, sweet tracks that just burned with excitement. Not just the aforementioned “…Bitch” and “…Girl,” but also opener “Last Chance,” “Rollover DJ” and “Take It Or Leave It,”; slow burner ballads like “Look What You’ve Done” and closer “Timothy,” and all the rest. I really don’t think there’s a bad one in the bunch.

On these two CDs you get the album plus a handful of B-sides on disc one – of which, “Sgt. Major” is killer and the acoustic version of “…Girl” is awesome – and all kinds of different versions, B-sides and demos on disc two. That second CD contains just about every outtake, edit or live recording from the era that exists (though I know of a few things that aren’t here), and here’s where this collection is a bit much. I can’t imagine there are many who need to hear “…Bitch” in an album version, an edit, a second edit and a one-off live version, all in one go. Likewise, “…Girl” appears in album, acoustic, edit and live versions. That’s a whole lotta love for just two songs! YET… you DO get some real scorchin’ tracks like “Sweet Young Thing,” a totally different demo version of “Lazy Gun,” another great in “You Don’t Look the Same,” and a cover of “That’s Alright, Mama” that really buries Elvis’s version. Why the obscure tracks that have appeared on earlier reissues that aren’t here, aren’t here, is a mystery we may never know the answer to, though it’s probably due to some rights issues that are likely to be as boring as watching paint dry. And why do that when you can listen to Get Born? I mean, if you’re gonna do that, at least put on some Jet and watch that paint set!

Ranting and rhyming aside, the two CDs here – plus the region-free, NTSC DVD containing eight videos* – make this the essential edition of this Down Under band’s first and greatest triumph. – Marsh Gooch

Way back in 1982 I was a nineteen year old college student discovering punk and new wave via my college radio station, KCMU. Yes, MTV was a factor in my alt-rock education, but to a much lesser degree. At the University of Washington’s student-run 90.3 FM (atop the Communications Building in room 304), we had the run of all the records in its library. It had decades’ worth of rock ’n’ roll, but what I was most attracted to was the current records coming out that were in the station’s daily rotation. One of them was RICHARD HELL & THE VOIDOIDS’ Destiny Street, the 1982 sophomore release from the once member and co-founder of Television. On the covers of KCMU’s records were stickers for the DJs to scribble their comments, and if I remember right, more than one of the older jocks had written “not as good as Blank Generation” as their sentence-fragment review; naturally I had to dig that one up and decide for myself. Between the title track and “Love Comes in Spurts,” I think I did like Blank better. But Destiny Street wasn’t too shabby, either.

I tended to gravitate, at least early on, to songs with kooky titles, so things like “The Kid with the Replaceable Head” and “Lowest Common Dominator” were my initial faves. These were tunes propelled by twangy, angular/staccato guitars, a pretty funky bass and fairly straight ahead drums. I don’t remember if, at the time, I was bothered by Richard Hell’s out-of-tune, subtle caterwauling or not – I was probably too unschooled to notice it much and it likely was hidden by what I thought was just a highly unique vocal delivery. (It was years before I noticed, for instance, how flat my beloved Elvis Costello sings, so…) Anyway, the band’s semi-punk, semi-new wave sound was fairly new to me, and the couple of ’60s garage covers on the album weren’t in my radar yet (“I Gotta Move” and yes, even “I Can Only Give You Everything”), but the record was pretty dang cool regardless of what I did or didn’t know then.

Today, Richard Hell isn’t someone I’d choose all that often to listen to – I am a much bigger fan of Television – but I can appreciate various aspects of what he and his Voidoids put down. When you pick up this reissue of Destiny Street you’re gonna get FOUR different versions of the album. Fir 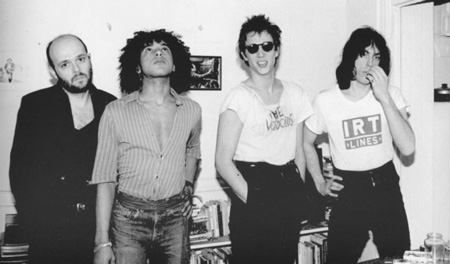 st, the original from ’82, then a 2009 version entitled Destiny Street Repaired that uses the original’s basic tracks but features re-recorded guitar solos and new lead vocals. Version three – Destiny Street Remixed – is a brand new mix of the original (from the 24-track tapes), and finally a selection of demos of most of the songs that were destined for Destiny Street. Why so many versions? I guess the answer to that would have to be, for lack of a better answer, why not?! I can think of a couple reasons, actually. Hell has apparently always disliked the way the original album turned out, so in 2009 he drafted Bill Frisell and Marc Ribot to add some guitar parts (original Voioids guitarists Robert Quine and Naux had passed away). That might have been the final version of the record, but then, just last year the original multitracks for 3/4 of the album turned up and so Richard, not satisfied with version two either, set about remixing the original tracks with the Yeah Yeah Yeahs’ Nick Zinner. After listening to these three different versions three times I don’t find enough difference or improvement in the “repairs” or remixes to really warrant all this fuss. (I will say that Remixed seems to put Hell’s vocals more up front in the mix, which doesn’t exactly improve the album…)

BUT… I DO find that Destiny Street, regardless of which version I’m listening to, is a much better album than I remember and I’m really enjoying it. I like the Clash-style guitars in opener “The Kid with the Replaceable Head” (a la “Capitol Radio Two,” though those electrics are toned down enough in the later versions that you don’t quite notice the resemblance), I like “Ignore That Door” with its souped-up Steppenwolf vibe, and I like the title track and its spoken word narration.

So if Richard Hell wants to go to all this trouble after all these years to redo his band’s swan song release, and a reputable record label wants to put it out as a deluxe 2CD set (or just the Remixed portion as a single LP) AND it rekindles the Voidoids’ flame, I guess I can go along with it. I mean, you know when Hell and his honchos were running this concept up the flagpole they must have been considering what I, Marsh Gooch, would think about the enterprise. Psych. – Marsh Gooch

THE GUN CLUB is primarily remembered for their incendiary debut album, Fire of Love, a psychobilly/roots rock/punk classic that introduced the world to vocalist Jeffrey Lee Pierce. Their sophomore release, Miami, came out in 1982 on Blondie’s Chris Stein’s Animal Records label and has just been reissued by Blixa Sounds.

Continuing in the same vein as their introductory platter, Miami was, in many ways, the quintessential ’80s American indie rock release. With Ward Dotson’s twangy rhythm guitar leading the unadorned but solid bass and drums of Rob Ritter and Terry Graham, The Gun Club’s sound was at the root of two then upcoming indie rock camps: the twangy Americana guitar rock of R.E.M., Guadalcanal Diary, et. al., and the cowpunk/voodoo vibe of The Cramps, Tex & The Horseheads and the like. Leader/singer Pierce – “Elvis, Jim Morrison and Iggy Pop all rolled up into one” (says Dotson in a recent interview) – was a big fan of the blues and other American music but wasn’t exactly the greatest candidate for carrying the torch. At least, on paper. But in the studio and on stage, he conjured his influences into a compelling, raw, unschooled vocal style that would make you forget, if indeed you knew, that he was really a “guy that lives with his mom in Reseda” (Dotson again).

That first album, Fire of Love, was one of Slash Records’ earliest releases (on their Ruby subsidiary) and was a good seller for the label. But it wasn’t long before Pierce had burned a lot of bridges, both personal and professional, with his difficult personality and questionable antics. By the time they recorded Miami they had signed to a new record label that was backed by a larger label (Animal was distributed by Chrysalis Records). Unlike the crisp, raw sound of their debut, this album – produced by Stein – has a slightly muffled sound that doesn’t jump out of the speakers quite the way Fire of Love did.

Still, its songs flicker and burn in a similar fashion. “Devil in the Woods” and “John Hardy” stand out as tunes that could’ve been on the Slash release, while opener “Carry Home” and the cover of CCR’s “Run Through the Jungle” are less psycho and closer to that generic college radio sound that many of us still have stuck somewhere in our heads. Overall, though, in hindsight Miami is just a notch less-great than its classic predecessor.

Blixa Sounds’ 2CD and 2LP reissues include the original Miami on disc one and that album’s demos on disc two. (The compact disc version adds an additional handful of songs demoed for Miami but eventually released on The Gun Club’s next album, The Las Vegas Story.) The CD package contains interesting liner notes, skeletal credits and only a few small photos (there is no actual booklet included in the six-panel digipak; I’m not sure if you get more in the 2LP configuration), but the sound is punchy despite the subtle high end. Regardless, it’s great to have Miami restored to availability after so many years of obscurity. We may not have Jeffrey Lee Pierce around anymore, but his band/spawn continues on. – Marsh Gooch