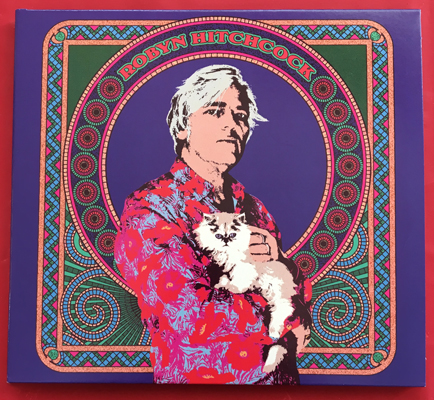 It’s been awhile since ROBYN HITCHCOCK put out a proper full-band album. Or at least, since he did one in the same spirit as his Egyptians-era albums of the mid to late ’80s. This one, cleverly titled Robyn Hitchcock, is a lot like those heralded albums such as Fegmania! and Globe of Frogs. Recorded in a short stint in Nashville, Robyn apparently decided it was time he unleashed a batch of songs on an untested group of musicians and see what happens. Luckily, the results are in and this 2017 release is available for us to hear for ourselves.

Having started his recording career as founding member of The Soft Boys, Hitchcock went solo for a couple of albums before, in 1985, putting together the Egyptians (really The Soft Boys minus one) and releasing Fegmania! The Byrdsy, Barretty band came up with some great arrangements of RH’s tunes, including “Egyptian Cream,” “My Wife and My Dead Wife” and the odd but good “The Man with the Lightbulb Head.” The band went on to do a handful of albums until, in the early ’90s, they disbanded and Hitchcock went on to pursue extra textures (within and without group settings) with varying results. 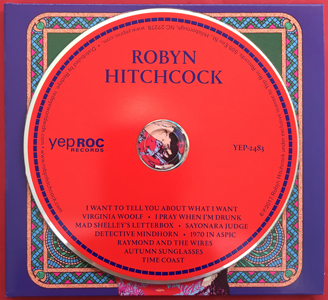 What I like about his new one—I still can’t believe he didn’t come up with a better title than Robyn Hitchcock—is that it recalls the Egyptians but adds some interesting vibes via pedal steel guitar (don’t get yer panties in a wad; it ain’t a country record!) and the sheer kismet of making music with a new group of people. At times the tunes feel like they were channeled through the Egyptians—or that the band, perhaps subconsciously, asked themselves, “what would the Egyptians do?” when approaching these songs. Definitely, “Mad Shelley’s Letterbox” and “I Want to Tell You About What I Want” have that classic vibe. But a few, like “Virginia Woolf,” “Autumn Sunglasses” and “Raymond and the Wires” go that extra mile to reveal something different. Maybe it’s that pedal steel adding those swirly, stretchy, almost keyboardy soundscapes. Or even just the difference in the bass—Jon Estes has a different tone and approach to the instrument than Andy Metcalfe did. Whatever it is, if you’re a seasoned fan of RH&E then you’ll be pleased and even surprised at how good this album sounds. If you’re more attuned to Hitchcock’s post-Egyptians epoch then this will feel good, too. Robyn & Co. have given us a record that all of us Hitchcock fans can enjoy, and that’s pretty awesome. And one with a lot less insects crawling around.