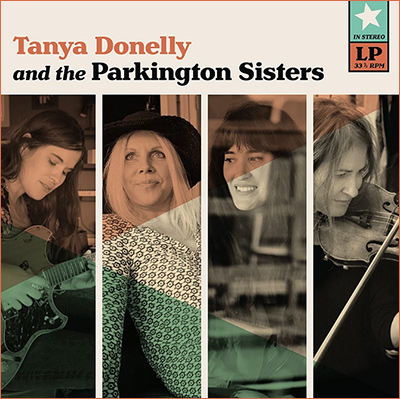 Well, it sure is a mighty long title for an eponymous release. TONYA DONELLY AND THE PARKINGTON SISTERS’ new album of cover versions doesn’t have a clever title but it does have an interesting vibe/concept. I must confess a few things at the outset: I was a big fan of Belly, Donelly’s ’90s alternative rock band, back in the day; I was drawn to Tanya Donelly and the Parkington Sisters due to that first confession and the track listing of this release; and, I had no idea who these Parkington Sisters were until I looked ’em up on the internet.

Donelly was the lead singer, songwriter and guitarist with Belly, who put out one excellent album, Star, and a very good album, King, plus a host of compelling singles for 4AD Records (or Sire here in the States). The Parkington Sisters are Rose, Sara and Ariel (plus sometimes Lydia; I mean, she’s always a sister of theirs but not always in the group), and have been putting out light pop/indie music together since 2010. Donelly was approached by American Laundromat Records to make a covers album and decided that these Parkington Sisters would bring the right vocal and instrumental vibe to whatever songs got chosen, and so, here we are.

This 9-song excursion into other people’s music opens with a moody, violin-heavy version of The Go•Go’s album cut, “Automatic.” Already knowing that song gave me the idea that this might be an interesting album, with the songs included being mostly cunning and not cloying choices. (I’m very glad they didn’t go for “We Got the Beat”!) That’s followed by a Leonard Cohen tune I’m not very familiar with (actually, most of them fall in that category), “Dance Me to the End of Love.” Others are covers of songs by Echo & The Bunnymen (“Ocean Rain”), Crowded House (“Devil You Know”) and Mary Margaret O’Hara (“You Will Be Loved Again”). The ones I was more interested in were “Let Me Roll It,” first done by Paul McCartney & Wings on Band On The Run (1973), a more uptempo and electric tune than most of this album – and though it’s not one of Wings’ most obvious songs, it’s ultimately a safe – but enjoyable – choice. 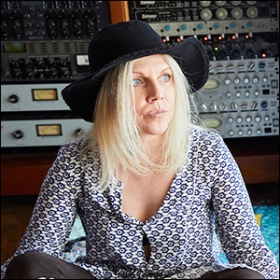 Two other covers I felt were definitely obvious choices. One is “Kid” by the Pretenders, though Donelly’s reasoning for choosing it makes sense: “[It] was [considered] actually on the heels of a conversation that we’d been having about children.” I initially would’ve gone for a Chrissie Hynde tune with a little more balls but then that wouldn’t have fit this lighter-vibed album (imagine “Tattooed Love Boys” with violins!). The other is The Kinks’ “Days,” a Ray Davies tune that is probably his most-covered song and definitely a no-brainer. I think Donelly could have given “I’m Not Like Everybody Else” or “See My Friends” a real go, though she’s the kind of singer who’s not going to cover a song if it doesn’t have a personal meaning to her, so maybe my choice doesn’t speak to her the way her choice does. What do I know? I’m just a rock critic. Finally, I do like the version of the Mike Nesmith song, “Different Drum,” first done and made into a hit by Linda Ronstadt when she was still with The Stone Poneys. It is kinda soft, true, but it’s a sweet song and it’s nice that Tanya and the Parkingtons wanted to pay tribute to Ronstadt.

American Laundromat is covering all the bases by offering this album in a variety of colored vinyl versions, as well as on CD and even cassette. You’ll have to go to the website to figure out what is still available and where.

Overall, Tanya Donelly and the Parkington Sisters is a nice album, with light fare that’ll be great to put on at dinner and serve as enjoyable background music. That’s not meant to be a “dis,” just that, once you’ve given it a first listen it’s not gonna be a go-to album when you wanna rock out. Put it on when you want to relax, however, and it’ll be just fine. – Marsh Gooch