A couple of years ago XTC’s Colin Moulding and Terry Chambers teamed up to form TC&I, and after releasing an EP of new material (2017’s Great Aspirations; reviewed here), they did some live shows and recorded them. Naked Flames – Live at Swindon Arts Centre is the souvenir of these concerts, a baker’s dozen of songs originally recorded by Moulding and Chambers in one of new wave’s most celebrated groups. Including one of XTC’s other songwriter’s tunes (“Statue of Liberty”), the selection is a pretty good look at Moulding’s best work.

Colin Moulding was definitely the George Harrison of XTC, contributing few songs to the band’s albums while Andy Partridge-as-Lennon-&-McCartney had the spotlight as the premier wordsmith in the group. Here TC&I run through many of Moulding’s good ones, such as “Grass,” “Making Plans for Nigel,” “Life Begins at the Hop,” “Ten Feet Tall” and a few more obvious choices, take a stab at later tunes like “Standing in for Joe,” and two original TC&I tunes, “Scatter Me” and “Say It,” and the result is pretty good. I say that because, though the band is not bad, they’re not exactly great either.

While it’s nice to hear some of these XTC tunes played live, there’s a certain vibrancy missing on this disc. I think that’s partly due to the recording itself, which is missing some top end shimmer and therefore lacking in live vibe, and partly because Moulding’s voice seems kind of weak. They may have been able to beef it up for XTC’s studio recordings but in this live situation it lacks bulk.

This all being said, there’s no doubting that Colin Moulding has written some truly great songs, and TC&I covers them ably on Naked Flames. These live renditions just don’t pack the same punch that XTC’s originals did. Chances are the initial interest in these versions will wane soon after first hearing and the superior XTC takes will remain the quintessential versions of Colin Moulding’s greatest hits.

Lots of insults have been lobbed at LINDA McCARTNEY since the day she entered husband Paul’s life. “She broke up The Beatles,” “she can’t sing,” “she’s a bleedin’ vegetarian,” etc. This reissue of the posthumous compilation Wide Prairie may not go far in turning that tide, but it will – at the very least – go a ways to helping the Macca nerds of the world fatten up their collections a little more.

This 16-track album was first released in 1998, and 21 years later it’s still an interesting yet slightly troublesome undertaking. There’s a number of great songs here, including “Seaside Woman” (recorded in ’72-’73 during Wings’ Red Rose Speedway sessions), “Cook of the House” (which first appeared on Wings at the Speed of Sound in ’76) and album closer “Appaloosa,” but the rest of the material is cute yet not crucial. A few songs are just not good, like “The White Coated Man,” a screed against lab testing of animals (not a bad cause, mind you) and the bulk of the rest is just fair-to-middling. I do like “I Got Up” and “The Light Comes from Within,” both dust-yourself-off-and-get-back-up-on-the-horse ditties, and “B-Side to Seaside” (another previously released track, the [ahem] B-side to “Seaside Woman”), but at 16 tracks this album is a handful of tracks too many. It’s highly likely that this compilation consists of every single track Linda finished before her death, six months before Paulie first put out this collection.

Wide Prairie has a nice lightness to it, with humor abounding, and some nice cover versions (“Mister Sandman,” “Poison Ivy”), too. You even get two tracks that were co-produced by reggae legend Lee Perry (reggae is actually part of the foundation of this elpee)! Whether you care for Linda McCartney’s girlish singing (flawed but fun) or not, it’s not a bad record at all. It’s just not that great. As for the Macca collectors out there, they’ll want the milk/blue vinyl limited edition (may already be sold out), but there’s also a regular black vinyl version and a compact disc. However, there are no more tracks on this reissue than there were on the ’98 release, so you’re gonna have to be an accomplished aficionado to want to pick this version up. 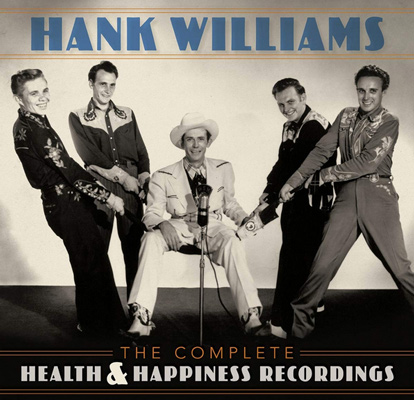 If you died as long ago as HANK WILLIAMS did – and especially if people still care about the music you made – there’ll likely be a boatload of reissues in your wake. The Complete Health & Happiness Recordings is one such release, it being a repackage/ remastering of something that already came out at least once during the CD era (a two disc release from 1993). These were “live” shows recorded in 1949 for dispersal to various radio stations and sponsored by anybody willing to pony up the dough, arriving on big 16″ transcription discs that the stations would play on the air along with commercials for that sponsor’s products. (It’s a long story, recounted in this package’s booklet, but the only taker for Williams’ show was Hadacol, a patent medicine made with a liberal dose of alcohol that supposedly cured all kinds of ills; see “snake oil.”)

BMG’s new corralling of this material is said to be complete, and by that measurement there are eight fifteen-minute programs consisting of Hank Williams and his Drifting Cowboys running through many of his hits, one of them twice (“Lovesick Blues”), while also running through the show’s opening and closing themes eight different times (“Happy Rovin’ Cowboy” and “Sally Goodin”)! Emcee Grant Turner introduces each show with a peppy little speech, followed by Hank himself sounding humble and contrite as he says hello and launches into the group’s first song (“A Mansion on the Hill,” for instance, “Lost Highway” or “Wedding Bells”), and then into a fiddle instrumental spotlighting Drifting Cowboy Jerry Rivers, then a few more songs and the aforementioned closer. These versions of the songs don’t seem very different from Williams’s late ’40s master studio takes of them, and a number of his bigger songs are here, but pretty much every song on this set was also recorded by the man for MGM Records (his original label). The patter between Hank and Grant is very homey and corny, yet still kind of entertaining seventy years on.

And then there’s Hank’s wife, Audrey Williams. Well, what can you say about Audrey? You could say she was reasonably good lookin’, and you could say – if you know your Hank history – that she was also a right pain in the ass. After listening to the first half of The Complete Health & Happiness Recordings, you’ll also likely say the woman couldn’t have carried a tune if it had a handle on it. Miss Audrey appears on the first four shows (the quad that make up CD1), bringing her wavering, quavering vocals to four songs either with or without Hank. I can say this: at least on the ones she sings with her husband her voice is covered over enough to make it only a minor nuisance. On the others, well, friend, she’s on her own so you’re on yer own.

The good news, folks, is that the sound quality here is superb. Considering the songs on The Complete Health & Happiness Recordings were preserved (if you can call it that) on old transcription discs, the possibility of dicey-sounding audio was great, and so it’s a pleasure to report that the mastering here is excellent, with nary a pop or click in earshot and the entire mono spectrum clear and rich. The pure country music Hank and his Drifting Cowboys made comes through quite nicely, and that’s one of the reasons these recordings still matter after so many years. Thankfully, they sound good enough to listen to more than once – and that ought to add to, if not your health, then at least your happiness.

No, PETER CASE isn’t balding and trying out toupees. He’s got a new solo album out, and it’s a real corker (to use our Limey friends’ parlance). After a 2009 that saw Case go through heart surgery without insurance AND the release of 4 Case-related albums (things with The Nerves, The Plimsouls, et al.), the man recorded Wig! with DJ Bonebrake of X and some other friends. Just like most of his releases, it’s very heartfelt without being corny or doomy gloomy.

Perched somewhere between his mostly-solo albums (Sings Like Hell, et al.) and his band records (Six-Pack of Love), Wig! has a very bluesy vibe, yet it doesn’t use the usual 12-bar template. There’s a gutsy, smokey room feel, yeah, but Case’s lyrical observations, along with his band’s punk rock pedigree, make for songs and arrangements that mark this for solo album of 2010. It opens with “Banks of the River” and its swampy guitar and piano intro, followed by the more Chicago-bluesy “Dig What You’re Puttin’ Down.” If I told you there’s a bit of a John Fogerty thing going on here, too, would it keep you from checking it out? I hope not, because it’s just one of the many I could call up that span the album, yet this record is quintessential Peter Case. I read somewhere that this was a return to his Plimsouls past (and sadly I n

oted it in my new releases update a few weeks ago), and that couldn’t be more wrong. The closest it gets to that is a remake of “Old Blue Car,” which appeared on his first post-Plims LP. Wig! has a great feeling of hope to it, not in a hokey way, but in a more post-modern fragmented neo-traditionalist kinda way, like on “House Rent Jump” and its side two counterpart, “House Rent Party.”

In all, Wig! has all the elements that make a great Case for Peter. (Ah, crap, sorry about that.) Pick one up now…