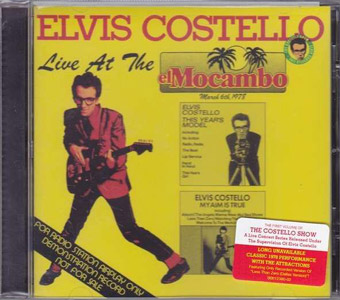 My relationship with ELVIS COSTELLO has been a rocky one. I wrote a piece on him for my 9th grade newspaper, based solely on taking my journalism class teacher’s copies of My Aim Is True and This Year’s Model home for the weekend and coming up with what I’m sure is a shoddy little piece of writing. (Thanks Mr. Bishop!) Next thing, Armed Forces comes out with that bonus 7″ of Live At Hollywood High. I ride my bike to some local record store, buy it, strap the bag to the rack on the back of my ten speed, and off I go. Next thing you know I’m his biggest fan. I buy everything. Every import single, 12″, CD single, everything. Then things changed…

Nowadays the guy drives me crazy. He tries too many genres, collaborating with just about everyone who’ll have him. And he’s married to Diana Krall! How’d he manage that? Well, it’s not germane to this review so I’ll move on. The only releases of his that I’ve bought in the last decade or so have been the reissues and the ones where he’s actually playing ROCK ’N’ ROLL. So here’s Live at the El Mocambo, which was originally released as a Canadian promo album, then as a bootleg (that’s what I had back in the day), then came out as part of a Rykodisc box set. Now he’s put it out as part of a live series of value priced CDs. And I come a-runnin’! This March 1978 show was just after he’d put together The Attractions, the best band he ever had (and with the best bass player he ever had, Bruce Thomas). It’s a fiery, ragged set, recorded for a Canadian radio station (so the sound quality’s a bit compressed and flattish), and features the band doing songs from the first two albums.