Hank Williams • Pictures from Life’s Other Side [Book/6CD Set] 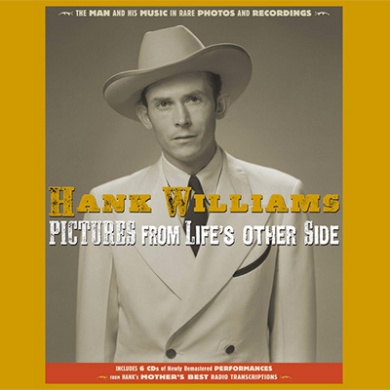 Hey friend, did you say there’s a HANK WILLIAMS revival going on? Did I miss the memo? Well, there’s no need to print one out because Pictures from Life’s Other Side has just hit the stores and it’s the second big release in half a year celebrating ol’ Hank’s legacy. That’s close enough to a memo to me.

“The Man and His Music in Rare Photos and Recordings” is the tagline of this behemoth, which consists of a 272 page hardcover book (inside a nice slipcase) loaded with great photos and housing six CDs of the music Hank made for yet another syndicated radio program, this one sponsored by Mother’s Best Flour. There is a bountiful dozen dozen (144) songs here, many that Hank & His Drifting Cowboys or alter ego Luke The Drifter never recorded for MGM Records in the late 1940s-early 1950s. Before we get to the music, let’s talk about the book. It’s beautiful, with an exhaustive and exhilarating selection of photos – many never published – in both black and white and (a handful in) color. Some are staged, studio shots, some are fans’ photos of the star and those very fans. Even the familiar pictures are reproduced clearer than ever before. The book itself is so fancy that it’s even got a red ribbon attached so you can mark your place; I mean, there’s no way you’re gonna get through this tabletop book in one go! It wouldn’t be a stretch to say that the book is worth the price alone. 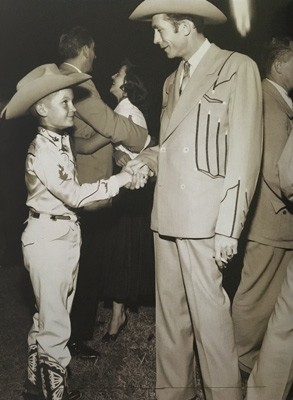 As for the music on Pictures from Life’s Other Side, the songs were cut throughout 1951 in a recording studio, “live” with Hank Williams’ Drifting Cowboys current lineup. One of the things that makes this collection so cool is that, unlike on last year’s Health & Happiness Shows release (reviewed here), Hank and his band mates sound natural and off-the-cuff between songs. It’s a bit jarring when the banter is snipped off or quickly faded, but it does cut down on the hokey dialog that sometimes makes that other radio show release kinda corny. Many of Williams’s greatest hits are here, of course, but there are loads of not so obvious cuts, such as one version of “Dear Brother,” which Hank sings with his then-wife Audrey (I’ve noted how bad a singer she is before, most recently in that aforementioned review). On this particular take it’s like you’re listening to Hank & Audrey channeling thirty years into the future to John Doe & Exene Cervenka of punk band, X. I gotta say, though, that I’d much rather hear John & Exene sing “Los Angeles” than Hank & Audrey singing anything at all. (Maybe one day John & Exene will cut an album of Hank & Audrey hits! It’d be sorta like a second volume of X alter ego band The Knitters’ Poor Little Critter on the Road.)

Considering the hugeness of this Hank volume, you could likely find yourself on a lost highway going through Pictures from Life’s Other Side – I’ve only made it through the first three CDs and two quick runs through the book – and that means that the true fan will find lots to like about this massive book and music set. Cheryl Pawelski of Omnivore Recordings fame can again be thanked for producing yet another Hank Williams treat, and it’s Michael Graves who did the big job of restoring and remastering the music. (A host of others also should be thanked, including Hank historian Colin Escott, who assembled the book [and who wrote the definitive biography on our subject a few decades ago].) Three cheers for Hank Williams, his Drifting Cowboys, and the fans-in-high-places who keep the man’s fire stoked year after year. — Marsh Gooch

If you died as long ago as HANK WILLIAMS did – and especially if people still care about the music you made – there’ll likely be a boatload of reissues in your wake. The Complete Health & Happiness Recordings is one such release, it being a repackage/ remastering of something that already came out at least once during the CD era (a two disc release from 1993). These were “live” shows recorded in 1949 for dispersal to various radio stations and sponsored by anybody willing to pony up the dough, arriving on big 16″ transcription discs that the stations would play on the air along with commercials for that sponsor’s products. (It’s a long story, recounted in this package’s booklet, but the only taker for Williams’ show was Hadacol, a patent medicine made with a liberal dose of alcohol that supposedly cured all kinds of ills; see “snake oil.”)

BMG’s new corralling of this material is said to be complete, and by that measurement there are eight fifteen-minute programs consisting of Hank Williams and his Drifting Cowboys running through many of his hits, one of them twice (“Lovesick Blues”), while also running through the show’s opening and closing themes eight different times (“Happy Rovin’ Cowboy” and “Sally Goodin”)! Emcee Grant Turner introduces each show with a peppy little speech, followed by Hank himself sounding humble and contrite as he says hello and launches into the group’s first song (“A Mansion on the Hill,” for instance, “Lost Highway” or “Wedding Bells”), and then into a fiddle instrumental spotlighting Drifting Cowboy Jerry Rivers, then a few more songs and the aforementioned closer. These versions of the songs don’t seem very different from Williams’s late ’40s master studio takes of them, and a number of his bigger songs are here, but pretty much every song on this set was also recorded by the man for MGM Records (his original label). The patter between Hank and Grant is very homey and corny, yet still kind of entertaining seventy years on. 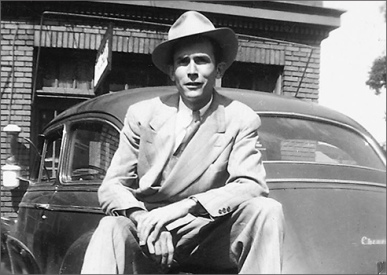 And then there’s Hank’s wife, Audrey Williams. Well, what can you say about Audrey? You could say she was reasonably good lookin’, and you could say – if you know your Hank history – that she was also a right pain in the ass. After listening to the first half of The Complete Health & Happiness Recordings, you’ll also likely say the woman couldn’t have carried a tune if it had a handle on it. Miss Audrey appears on the first four shows (the quad that make up CD1), bringing her wavering, quavering vocals to four songs either with or without Hank. I can say this: at least on the ones she sings with her husband her voice is covered over enough to make it only a minor nuisance. On the others, well, friend, she’s on her own so you’re on yer own.

The good news, folks, is that the sound quality here is superb. Considering the songs on The Complete Health & Happiness Recordings were preserved (if you can call it that) on old transcription discs, the possibility of dicey-sounding audio was great, and so it’s a pleasure to report that the mastering here is excellent, with nary a pop or click in earshot and the entire mono spectrum clear and rich. The pure country music Hank and his Drifting Cowboys made comes through quite nicely, and that’s one of the reasons these recordings still matter after so many years. Thankfully, they sound good enough to listen to more than once – and that ought to add to, if not your health, then at least your happiness.