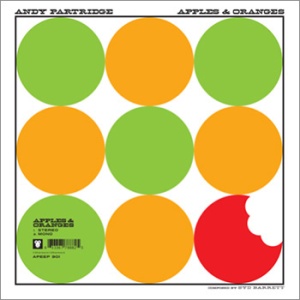 Here’s a couple of brand new cover songs by ANDY PARTRIDGE, he the main man of XTC and the Dukes of Stratosphear. Undertaken to ring in the completion of his new home studio, the two homages – to Pink Floyd and The Bonzo Dog Band – are played entirely by one human(oid).

“Apples & Oranges” is the A-side, a sweet ’n’ crisp version of the Floyd’s 1967 single (penned by Syd Barrett). The stereo and mono mixes are quite good and fairly close to the original, though Partridge sings it in a lower key. “Humanoid Boogie” comes in stereo and mono mixes, too, and is less faithful to The Bonzos’ original (from their 1968 album The Doughnut in Granny’s Greenhouse [or Urban Spaceman in the US]). I like how Partridge slows it down a bit and gives Neil Innes’ tune a more funky beat, and how he practically raps the lyrics.

Many fans of Mr. Partridge are probably expecting something that sounds like the Dukes of Stratosphear, XTC’s doppelganger in the psych rock world. But neither cover really enters that land, even though they’re both from the era the Dukes mined for their two celebrated records. And though I would be prone to favor either song, being a big fan of both early Pink Floyd and The Bonzos, I’m going with “Humanoid Boogie” – by a sliver – as my pick from this limited edition 10″ record. Rumor has it that it’s already sold out (they only pressed 1396 copies, for an arcane reason that Andy Partridge explains here), though a CD single and downloads are likely to follow. The two sides of this single definitely make a nice pair.

SIMON LOVE is the kind of guy you’d wanna punch the shit out of. He’s clever and funny, a real smart ass, and everything he says to you, no matter how mean, is just true enough to piss you off. Of course, if he was your little brother you’d think, “That little prick is funnier than shit!”

Take the title of his second album, Sincerely, S. Love x. Before you even see the song titles you know this guy is either a real precious fella or a sarcastic little snot. Indeed, with song titles like “God Bless the Dick Who Let You Go,” “(Why’d You Get That) Tattoo, Girl?” and “All This Dicking Around (Is Bringing Me Down)”, you know you’re in for an album that’s likely to be quite funny. And it is. AND… luckily… it’s damn good. Here’s a power pop record that sounds like Jellyfish going on a Beach Boys bender with Neil from The Young Ones in tow. Arrangements are pretty lush with ’60s organs (or maybe mellotron?) and guitars, thick harmony vocals and Simon’s boy-next-door singing and earnestness. Sincerely, S. Love x features some clever punnery, too, whether he’s singing “I never knew you were a Tennis Fan… how was I to know that love meant nothing to you” or “Here comes the Golden Boy, the sun shining out his ass and lighting up everyone he meets…”

Typically, so much sarcasm and wordplay will wear thin after a few plays, but thanks to Love’s clever hooks, semi-lo-fi production and near-epic arrangements, I don’t think that’ll happen. The fact that he can write a poignant, heartfelt love song with a title and chorus of “I F [Heart] U” is not lost on this rock critic. Sincerely, S. Love x (the x is as in x’s and o’s) is a power pop album with humor as its secret weapon.

I couldn’t even remember how many years it had been since I last heard THE LORDS OF THE NEW CHURCH when I saw that their first album was being reissued. 1982’s cleverly titled The Lords of the New Church was one of the first “punk supergroup” releases and it contained some catchy post-punk/new wave tunes for fans of the band members’ earlier groups. Singer Stiv Bators (known here as just “Bator”) came from Cleveland’s Dead Boys, while guitarist Brian James was a founding member of The Damned, the greatest band that ever lived.* Along with a revolving door of members (including early recruits Rat Scabies, also of The Damned, and Tony James of Generation X), the pair conjured a promising debut album that somehow failed to deliver lasting dividends.

Released at a time when punk had waned and new wave, goth and other genres were dawning, The Lords was a mixture of all of those – and perhaps that’s why it sputtered. It didn’t “pick a genre and run with it” at a time when that was (at least in hindsight) crucial. Listen to “Open Your Eyes” now and tell me how that single never became a hit. Well, in 1982 that kind of song wasn’t going to make the Hot 100 here in the States, that’s for sure. That’s not to say that it didn’t get some airplay on college radio, as many of us college DJs played it regularly, and MTV played it some in the early days when any song with a video had a good chance of airing on the fledgling cable video channel. But being released before I.R.S. Records co-created MTV’s 120 Minutes specialty show, its airings – both on TV and on the radio – were sparse regardless of the platform.

Now you can give The Lords of the New Church another try, as it’s being released in a new 2CD expanded edition. Disc One is the original album along with two B-sides and the single mix of the aforementioned “Open Your Eyes,” while the second disc is a live concert recorded in ’82 here in the USA. Packaged in its original UK cover art (which is actually quite hideous, as much as the US cover [at right] was boring), mastering for this reissue is quite good (you can always count on Bill Englot) and the images and liner notes are pretty good, too. You’ll likely enjoy and maybe remember some of the other tunes, such as “Russian Roulette,” the cover of “A Question of Temperature,” and their homage to the New York Dolls, “Li’l Boys Play with Dolls,” a song I clearly didn’t get at the time since I was just barely discovering that band (and pretty much anything that was good that wasn’t easy to learn about pre-internet/MTV/my subscriptions to Trouser Press and New York Rocker). While definitely of its time, The Lords is a worthy addition to the middle-aged hipster’s or ’80s acolyte’s CD library and warrants multiple spins.

Last year for Record Store Day we enjoyed the release of DAVID BOWIE’s triple LP live album, Cracked Actor (Live Los Angeles ’74), a superbly recorded and dynamically played concert. You either plunked down for a 3LP vinyl copy, or (as it turned out) waited two months to buy it as a 2CD, sensibly priced package. Many weren’t surprised at the release of the compact disc version, despite it not being announced when the RSD vinyl was. This year – no surprise this time – we got Welcome to the Blackout (Live London ’78), another 3LP RSD release trailed by a 2CD standard version. The vinyl, like last year’s release, comes in a double-gatefold package with photos from the concert and 180-gram LPs inside. (I’m assuming, pre-CD release, that that will be similar to last year’s CD package.) The concert itself was recorded at the end of Bowie’s 1978 post-Low tour, and features yet another band lineup.

I’m not as bowled over by this one as I was by Cracked Actor. The band is quite good, don’t get me wrong, but they don’t seem to gel as well as the ’74 group did and the mix isn’t as compelling. That being said, unless you’re the most curmudgeonly of Bowie fans, you’ll find a lot to like about Blackout, even if it’s just that the audio is much better than what has been available on bootlegs for years. The set list is quite good, anchored by a lengthy instrumental intro (Low’s “Warszawa”), and then mostly working backwards, song-wise, through DB’s catalog. You get a number of newer songs for the first half of the show, followed by inspired renditions of some of the man’s hits, including “Fame,” “Ziggy Stardust,” “Suffragette City,” et. al. Welcome to the Blackout ends on side six with “TVC15,” “Stay” and “Rebel Rebel” – a song I’ve never grown tired of and a great tune to wrap up the show with.

If Bowie’s estate keeps doing this every year, releasing great concerts most of us have never heard, I’m okay with that. I can’t imagine a time when they’d put out so many releases (reissues or new titles) that I’d get burned out on David Bowie’s music. (Check back here from time to time for updates on that prediction.) I’d much rather that than just see countless reissues of his back catalog remastered for no good reason.

Hey kids, hop in the car! It’s time for another quality collaboration between NICK LOWE and LOS STRAITJACKETS, and this time we’re off on a whirlwind trip to Tokyo Bay. In the front seat are A-sides “Tokyo Bay” and “Cryin’ Inside,” while our companions “Travelin’ Light” and “Heartbreaker” occupy the backseat.

Lowe & Los started their group discography with a great live Christmas record, The Quality Holiday Revue Live, a 2015 release with a few non-holiday tunes thrown in for good measure. The man and band toured that release (got to see them at the Belly Up in Solana Beach, CA), both that year and the next, and then the masked men did an album of Lowe’s songs, What’s So Funny About Peace, Love and Los Straitjackets, on which Lowe made a guest appearance (2017). Now we’re treated to a 2×7″ EP with two Lowe originals and two covers, making me hope they’ll be doing a full length collab one of these days.

Tokyo Bay is a return of sorts to Lowe’s early ’80s solo career, in which he played a hybrid of new wave, rockabilly and power pop that really suited both his songwriting and his voice. Typically backed by a crack team of musicians (including Paul Carrack, Martin Belmont and Dave Edmunds), Nick turned out some compelling records. As has always been his wont, he wrote some great originals and placed them among some swell cover tunes (“7 Nights to Rock” and “Born a Woman” come immediately to mind). Here we get originals “Tokyo Bay” and “Cryin’ Inside”, both kinda popabilly country tunes, and covers “Travelin’ Light” (recorded by the likes of Peggy Lee, Billie Holiday and Van Morrison) and “Heartbreaker,” written by the Bee Gees. Don’t worry, you’d never know it was a Brothers Gibb creation if you didn’t see the credits – Lowe makes it his own, like he always does with the songs he loves. This release again shows that Lowe also knows how to pick a band that can do justice to the material; Los Straitjackets have always been perfect sidemen (I’ve seen them back both Lowe and El Vez [at separate events!], and last summer they played with Marshall Crenshaw).

The 2×7″ comes in a nice gatefold cover, and though my records have mismatched labels on ’em, the four songs are all there and accounted for. Tokyo Bay’s available as a limited vinyl release as well as on CD and download and is out now.