Chris Hillman • Time Between: My Life As a Byrd, Burrito Brother, and Beyond [Book]

If ever there was a year for me to catch up on my rock musician biography reading, 2020 was it. And yet… I didn’t get to near as many bio books as I thought I might. I did happen to read CHRIS HILLMAN’s Time Between, though, and it was a worthwhile read at that.

Chris, you may or may not know, was a founding member and bass player for The Byrds (who shouldn’t need any introduction on this website). He left that seminal rock band to form another important group, the one that coined and embodied the concept of “cosmic American music,” The Flying Burrito Brothers (with the legendary Gram Parsons). After that Hillman moved on to numerous other groups, of both rock and country persuasions (his Desert Rose Band was super popular on the country charts in the ’80s). Time Between – named after one of his more popular Byrds songs – actually tells more of the time during. As you would likely hope, there is a good amount of Byrds and Burritos history here, with some light shed on some of those bands’ more lurid or difficult times (such as why David Crosby left The Byrds or his mercurial partner Parsons in the Burritos). Those with inquiring minds may want to go elsewhere to find the down ’n’ dirty details that Hillman leaves out; this Byrd doesn’t fly that way. Chris’s writing style is pretty plain (as befits a quiet bass player) so the excitement, for me, was in the anecdotes themselves – of which there are plenty, even for a relatively short biography. Another good thing: Hillman spends plenty of time on the obvious high points of his career, and the right amount of time on his youth, early groups, and the rest of his career post-Burritos. For these reasons, Time Between is a fun read but probably best suited for the Byrds or Bros. fan in your life. – Marsh Gooch 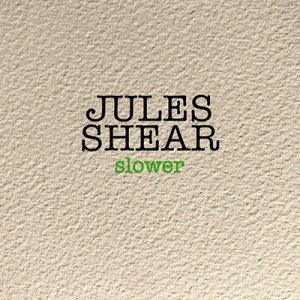 You may not know JULES SHEAR by name but there’s a good chance you know him by some of his songwriting credits. Despite having such a unique voice – and some pretty peculiar thoughts dressed up as lyrics – he’s penned hit songs for people like Cyndi Lauper, the Bangles and many others. Maybe he writes with specific people in mind? Or maybe they just pick the songs with more of a “universal” feel? Regardless, in the case of Slower, his latest solo album, the songs are definitely his to sing and the arrangements make that plain to hear.

I got into Shear in the late ’70s when he fronted the major-label-signed L.A. band Jules & The Polar Bears. Then as now, his voice was one that made you think you were listening to a boy singing a man’s lyrics. That new wave outfit surrounded his quirky (I hate that word but it’s the right one here) songs with equally off-kilter arrangements that were very much of the moment. From there Jules Shear went on to form a band called Reckless Sleepers and a solo career that went a long way to emphasizing his increasingly more mature lyrics. To tell the truth (something I usually try to do) I haven’t followed Shear’s career since the mid ’80s but was certainly aware of, for instance, Bangles’ version of “If She Knew What She Wants,” a song that signaled Jules’ new tools in the songwriting department. Circle around to today and Slower is a nice album to listen to. It’s certainly lighter than my usual fare but each listen brings out a new thought or twist-of-phrase, like the ones contained in the lyrics and title of “Between Hell and Hello” or “I used to think no one could catch me / But now I’m slower” from the title track.

With arrangements veering between pop-lite and Sinatra-esque – courtesy mostly of piano by Pepe, with some additional help from bassist Sara Lee, (the) John Sebastian on guitar, autoharp and harmonica, and assorted others on the rest – Slower is Jules Shear at a much more mellow, measured gait.

If you’re hoping for the energy level that accompanied Jules and his Polar Bears, you may as well grab one of those records to put on. But if you’re cool with Shear’s cooler, calmer 21st Century vibe then Slower may just suit you fine. – Marsh Gooch