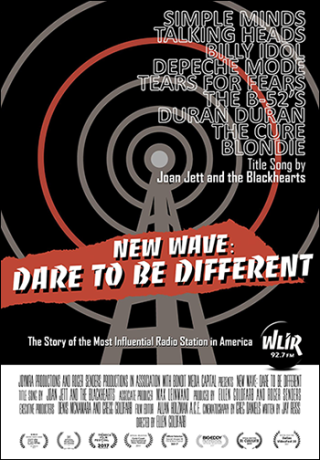 “The Story of the Most Influential Radio Station in America” is the subtitle for this documentary about WLIR, a Long Island, NY radio station that championed the new wave music that spewed forth from punk rock. New Wave: Dare to Be Different documents the rise and fall of both the radio station and the music itself by interviewing not only the DJs and other WLIR personnel, but members of many of the bands themselves. Billy Idol, Nick Rhodes (Duran Duran), Mick Score (A Flock of Seagulls), Howard Jones and more tell about their experiences in breaking in America thanks to the station’s support of their music.

In the early Eighties new wave music was rarely heard on the radio. When it was, you generally heard it on a college radio station, such as KCMU here in Seattle. (My own radio alma mater at the University of Washington; now it’s called KEXP and can be heard all over the world.) WLIR was one of the few commercial stations playing this kind of music (though Seattle had Stephen Rabow and KZAM), and because of its proximity to New York City and the headquarters of the record labels, as well as the staff’s enthusiasm, the station was instrumental in the early careers of U2, Depeche Mode, Blondie and many more artists. The story itself seems kind of typical: floundering FM station playing the same ’70s rock as everyone else decides to make a left turn and play something else, does so, develops a small but dedicated audience, turns it into something quite successful, and then has the rug pulled out from under it thanks to some seemingly tiny altercation. Years later, someone decides to make a documentary about said station and here we are with a handy DVD to watch it all unfold.

Maybe the story seems typical to me because it is very similar to that of KCMU and probably loads of other college and minor league commercial radio stations in America. It’s a Cinderella story, that’s for sure.

To the filmmakers’ credit, they got all the right people involved, from the DJs and staff to the bands (many of them big enough that they don’t need this exposure). It’s a bit peculiar that the movie is called New Wave: Dare to Be Different, and yet in the film itself the DJs talk about how they never referred to WLIR as a new wave radio station. Deciding on a title must have been a marketing decision. (I mean, if you’re gonna produce a documentary you probably wanna make your money back, right?) Regardless of title, it’s a compelling story that has more meaning every day our culture continues to be gobbled up by big corporations and then spewed back at us in handy, easy-to-explain soundbites and nuggets that lack the life force that birthed and formed it in the first place. 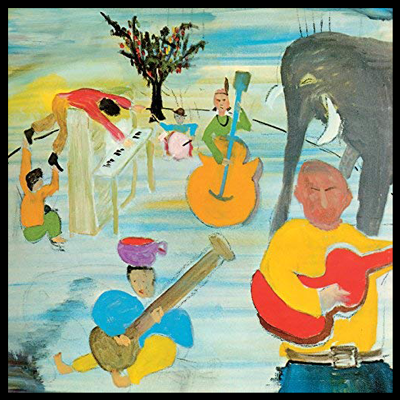 It’s taken me awhile to get to some of the current batch of reissues of great rock albums from 1968. One, THE BAND’s Music from Big Pink, has been remixed for its big anniversary and sounds better than ever.

Now, Big Pink is one of those albums that in many people’s books you’re supposed to like. Most folks who aren’t big Band-ophiles will know “The Weight,” a song that was featured in the celebrated movie, Easy Rider, starring Peter Fonda and Dennis Hopper. You might also know “Long Black Veil,” “I Shall Be Released” and possibly “This Wheel’s on Fire.” That’s half the album right there – why not get to know the rest of it?

Well, I was one who felt I should at least give it a try, some twenty or so years ago as a slightly arrogant college radio DJ who’d seen Easy Rider (didn’t get it then) and whose parents (mom and stepdad) had the soundtrack. That album had songs from the movie in it but – very lame – did not include The Band’s version of their own “The Weight,” which was the one used in the movie. The album cover said only “specially performed for this album by Smith”; no explanation of why the correct version wasn’t included. (It was probably stupid ’60s record company politics that kept The Band off the actual record.) But, as I later learned, it was on their own album, Music from Big Pink, which I had seen in record stores but knew nothing about. Eventually I pieced together that The Band had been Bob Dylan’s backing band for a few years, and that they had written some of the songs on Big Pink, their debut album, with Sir Bob. Alright, so The Band had great credentials. But what about the band itself? What were they like? You could say they were country rock or even “Americana before it was called ‘Americana’”. To call The Band rock ’n’ roll is a bit of a stretch, but they do fit in there at the country/folk end of the spectrum, and “Chest Fever” certainly has a killer rock groove. Whatever you call them, The Band were an interesting group of guys playing a unique version of rock that embraced country, folk, blues and gospel in a big way. Wiki it if you wanna.

This 50th Anniversary release of Music from Big Pink has been remixed by renowned producer/mixer Bob Clearmountain, who has clarified the, errr, mountain of elements that went into the original mix for a very nice listen. The vinyl version has been pressed on two 45 rpm records, giving more room for the songs to breathe (and giving you a slight workout from getting up to turn over the records a few times). These new mixes really do the record justice, though I don’t have a copy of the original to do a strict A/B comparison. (My memory rarely serves me well!) As pictured above, there is a special version available at The Band’s web site on pink vinyl, which was naturally the version I wanted. It may be sold out by now, but whether it’s pink or black, the vinyl Big Pink is a worthwhile purchase. For a deeper dive into The Band’s most celebrated album, the box set features numerous outtakes, a 5.1 mix of the entire album and the new stereo mix in 96kHz/24-bit high resolution (on a Blu-ray disc), as well as a bonus 7″ of “The Weight” b/w “I Shall Be Released.”