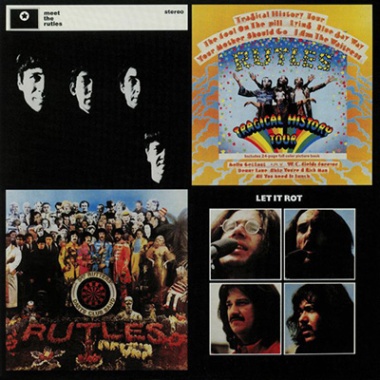 Ouch! THE RUTLES’ landmark anthology, The Rutles, turned 40 this year and nobody noticed. Was it because of another band’s bigger anniversary? Was it because of bad management? I’ll tell you what I think: I think it was the trousers.

For those wondering just who in the world The Rutles were, well, they were a legend. A living legend. A legend that will live long after other living legends have died. Okay, they were actually a parody of The Beatles. The idea was cooked up by Eric Idle (of Monty Python) and Neil Innes (of The Bonzo Dog Band), who wrote a mock rockumentary (a mockumentary, if you will) that was produced for an NBC-TV special by Saturday Night Live’s Lorne Michaels. That show, All You Need Is Cash, played on television in March 1978 and this record was written and recorded for it by Innes. Like the show itself, the songs parodied the history of The Fab Four by tackling the different types of tunes The Beatles wrote. So, for instance, there’s a song that recalls “I Am the Walrus” entitled “Piggy in the Middle,” or an Indian flavored, sitar clad tune called “Nevertheless” that recalls George Harrison’s forays into middle Eastern territory. It’s all quite clever. 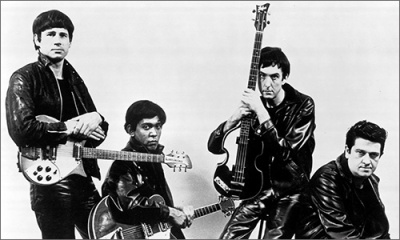 Neil Innes’ lyrics are funny and yet still an homage to John, Paul, George and even Ringo’s songwriting. And the arrangements are so spot-on, you would almost think you stumbled upon some unearthed outtakes. These Pre-Fab Four tunes are played by Innes and a handful of musicians who knew the foundational Beatles records well enough to craft twenty songs that bring a smile to the face and to the ears of any fan.

This time the record is presented by, of all labels, Parlophone (The Beatles’ original UK label)! The Rutles was originally released by Warner Bros. in both the US and England, but here in 2018 Warners and Parlophone are both part of Universal, so we get the album cover and labels sporting the latter’s logos and look. Sonically, the album itself is presented as the original was (14 songs), though the mastering job is much clearer than the 1978 issue and even better than the 1990 CD. 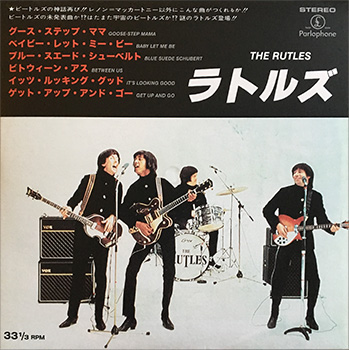 That CD gave us twenty Rutles tunes – the fourteen from the album and another six that were featured in the TV special but not on the record. To remedy that, included here is a 7″ EP with the other six songs that made the CD but not the original album, in a picture sleeve that’s a parody of a mid ’60s Japanese Beatles record. Also included is the original color booklet, which is a fun read, and an extra special insert of a mock press release. Strangely, the typography on the inside gatefold and in the booklet is different from the originals, but the artwork is otherwise presented fairly crisply so a change in typefaces shouldn’t be a big deal. (If you’re a normal person, which I am clearly not.)

If you’ve never watched All You Need Is Cash, which predates This Is Spinal Tap by six or seven years, it’s good for many laughs and you can get or rent it on DVD and Blu-ray. If you want to enjoy The Rutles’ music, the Rhino CD can be found online or you can treat yourself to this fab 12″+7″ set. For Beatles fans with a sense of humor, it’s not to be missed. 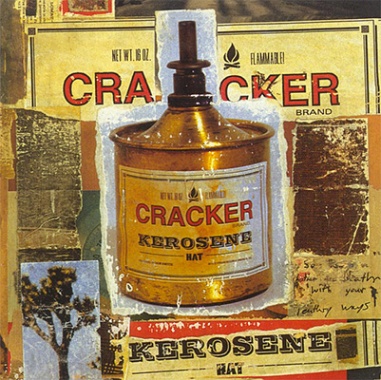 Well, that’s mighty, errr, low… No 25th anniversary celebration for CRACKER’s sophomore album, Kerosene Hat? The one that spawned their biggest hit, errr, “Low”? Not quite. It’s true that the band left their original (major) label, Virgin Records, in much less than amicable circumstances, so I assume the acrimony left the label’s current corporate overlords (Universal Music) unmotivated to do anything, as I assume Cracker themselves were. So, has anything been done to fête their (second) greatest album? Well, yes.

Leave it to Music On Vinyl out of the Netherlands to do it. Their 2LP, 180 gram release of Kerosene Hat is actually the first-ever vinyl pressing of the album (outside of a super rare Greek issue from ’93). Originally released mainly on CD and cassette, the album was their big ’90s breakthrough, with the hit “Low” and numerous other great “alternative” rock tunes, like “Get Off This” and my personal favorite, “Movie Star.” What’s cool about this reissue is that they didn’t try to cram the twelve songs from the album onto one record. Instead, MOV spread the dozen tunes over three sides and used side four for the “bonus” tracks that were buried on the original CD. Those songs, including the excellent “Euro-Trash Girl” and “I Ride My Bike,” were tucked away among dozens of silent :04 second tracks that were designed to confound listeners. 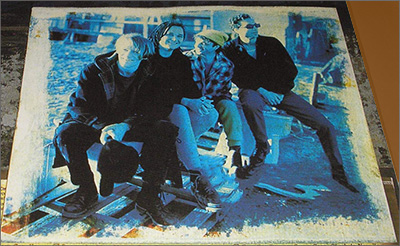 (The CD has 99 tracks on it, only 16 of which have music; these four songs are numbers 15, 69, 88 and 99 and all the rest after number 12 are blank.) I have a few other vinyl pressings from this label – Elvis Costello’s Brutal Youth and Iggy Pop’s Party – and they’re uniformly excellent. I don’t know whether this mastering job came from the original (maybe analog) master tapes, but regardless, the sound of this Kerosene Hat is worth putting on.

Cracker, the followup band to David Lowery’s indie/college rock group Camper Van Beethoven, took a more hard rock approach to the humorous tunes that he wrote. The band was/is of your twoguitarsbassanddrums variety, unlike CVB who augmented their arrangements with East European influences carried out by violin on wacky instrumentals and funny, catchy songs like “Take the Skinheads Bowling” and “Where the Hell Is Bill.” The fiddle wasn’t part of Cracker’s instrumentation so the sound was tougher and just right for the early ’90s, just before grunge was coined and gave birth to a thousand crummy, angsty bands. Kerosene Hat was the followup to Cracker’s eponymous debut album, which had a few minor college radio hits on it (“Happy Birthday to Me,” for instance). This 2LP vinyl reissue is a great way to enjoy the album a quarter of a century later. 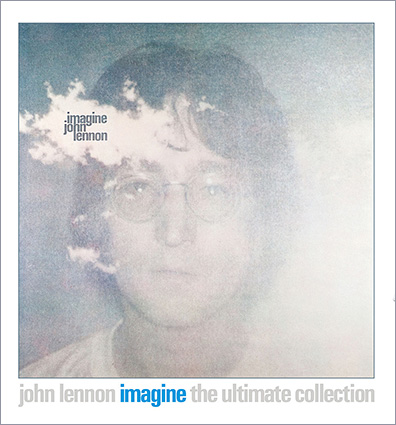 JOHN LENNON’s first solo album, Plastic Ono Band, was a raw slab of rock ’n’ roll, primal and painful and pretty near perfect. The followup, 1971’s Imagine, was a much more elegant affair… at least, that’s how it came off at the time. But, you’ll find when dipping into The Ultimate Edition, there is a vast sky of treasures that went into its creation. This substantial 2 Blu-ray/4 CD set gives us so much of it that it’s hard to know where to begin.

What strikes me hardest is just that: There is so much in this compact box set, it may just set a new standard for physical audio formats. Imagine: The Ultimate Edition starts with a newly remixed version of the original album, its ten songs ranging from the title track (which needs no introduction) to the folk-blues of “Crippled Inside” to the hauntingly beautiful and personal “Jealous Guy” to the densely hard politics of “I Don’t Wanna Be a Soldier, Mama, I Don’t Wanna Die.” The remixes, in both stereo and 5.1 surround sound, make it easier to appreciate this deep album; its original release’s mixes were murky and muddled – that has been resolved here in an amazingly coherent way. If you already know the album well you’ll be able to tell what’s changed, yet you’ll be pleased with this new mix. And if you’re new to Lennon’s second classic album you’ll dig what he did, too.

Next up, various singles from the era (remember, back then, many singles weren’t attached to an album), also in newly mixed stereo and 5.1. If you’re old enough you’ll remember something called quadrophonic, and the ’71 quad mix of Imagine is also included. (It was released only on vinyl in the UK and on 8-track tape [!].) There is also a set of out-takes, also mixed in stereo and 5.1, and these make you feel like you were right there in the studio with Lennon & Co. as they were sorting out their arrangements in prep for the final takes. Sheesh! 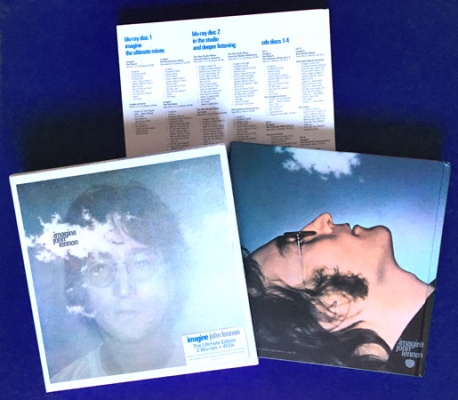 That’s only BD disc one. The second Blu-ray gives us another, further set of raw mixes, another set of out-takes, a set of elements (for instance, just the strings from “Imagine”  or a solely acoustic take of “Oh Yoko”), and what they call “The Evolution Documentary” (which I haven’t gotten to yet). Are you lost? Because it’s easy to feel that way among all of this audio.

Unlike many “super deluxe editions” that have come out, Imagine is so exhaustive, it’ll take you many sit-downs to get through it. Most of today’s big bucks box sets just give us a bland stereo version/mono version/live renditions combination that practically wears out its welcome upon arrival. This one won’t be doing that anytime soon. Did I mention it comes in a nice, 9″ x 9″ slipcase? (Lennon had a thing about the number nine.) Considering what work went into preparing a release of this scope, Imagine: The Ultimate Edition is well worth its price. Don’t worry, though. If you’re not willing to go this far, there are lesser editions to check out, including slimmed down 2CD and 1CD editions and a 2LP version (which was available for preorder in a clear vinyl edition). For more on this huge undertaking and its various components, visit Paul Sinclair’s Super Deluxe Edition.