Hey kids, hop in the car! It’s time for another quality collaboration between NICK LOWE and LOS STRAITJACKETS, and this time we’re off on a whirlwind trip to Tokyo Bay. In the front seat are A-sides “Tokyo Bay” and “Cryin’ Inside,” while our companions “Travelin’ Light” and “Heartbreaker” occupy the backseat.

Lowe & Los started their group discography with a great live Christmas record, The Quality Holiday Revue Live, a 2015 release with a few non-holiday tunes thrown in for good measure. The man and band toured that release (got to see them at the Belly Up in Solana Beach, CA), both that year and the next, and then the masked men did an album of Lowe’s songs, What’s So Funny About Peace, Love and Los Straitjackets, on which Lowe made a guest appearance (2017). Now we’re treated to a 2×7″ EP with two Lowe originals and two covers, making me hope they’ll be doing a full length collab one of these days. 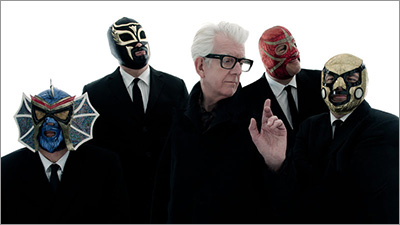 Tokyo Bay is a return of sorts to Lowe’s early ’80s solo career, in which he played a hybrid of new wave, rockabilly and power pop that really suited both his songwriting and his voice. Typically backed by a crack team of musicians (including Paul Carrack, Martin Belmont and Dave Edmunds), Nick turned out some compelling records. As has always been his wont, he wrote some great originals and placed them among some swell cover tunes (“7 Nights to Rock” and “Born a Woman” come immediately to mind). Here we get originals “Tokyo Bay” and “Cryin’ Inside”, both kinda popabilly country tunes, and covers “Travelin’ Light” (recorded by the likes of Peggy Lee, Billie Holiday and Van Morrison) and “Heartbreaker,” written by the Bee Gees. Don’t worry, you’d never know it was a Brothers Gibb creation if you didn’t see the credits – Lowe makes it his own, like he always does with the songs he loves. This release again shows that Lowe also knows how to pick a band that can do justice to the material; Los Straitjackets have always been perfect sidemen (I’ve seen them back both Lowe and El Vez [at separate events!], and last summer they played with Marshall Crenshaw).

The 2×7″ comes in a nice gatefold cover, and though my records have mismatched labels on ’em, the four songs are all there and accounted for. Tokyo Bay’s available as a limited vinyl release as well as on CD and download and is out now.