The Kinks • The Kink Kronikles [2LP] 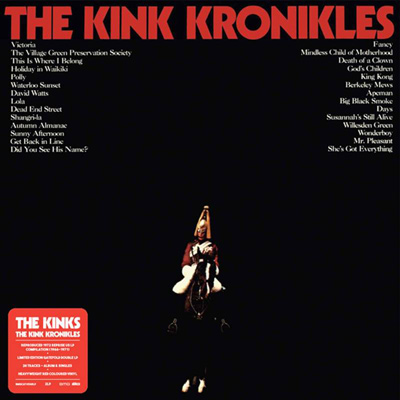 The Kink Kronikles is one of my favorite kompilations of any of those in my kollection. In 1972 THE KINKS had recently moved on from their original US record label, Reprise, to the hopefully greener pastures of RCA Records, so the wise guys in their former A&R department decided to put together a kollect… okay, I’m gonna stop with the “’k’ in place of ‘c’ thing” now… collection of a bunch of great singles and pair them with tracks – primarily B-sides – that they hadn’t yet released on album on this bounteous 2LP set, which has just been re-released for Record Store Day 2020.

One of the smarter things the label ever did was to draft rock critic and Kinks fan John Mendelsohn to not only compile the tracks, but annotate the package. What he put together, selection-wise, is an exemplary survey of what made the band so great. And his liner notes, which take up the entire inside of the gatefold cover, are an illustration of the fine art of putting someone on a pedestal and trying to knock them off of it at the same time. Mendelsohn’s twisted love of The Kinks is no secret (he later even penned a book about them), and neither was his sarcastic yet spot-on writing about rock music. They don’t make ’em like him anymore.

Remaining in Reprise’s catalog for many years, The Kink Kronikles was a valued 2LP set for the group’s hardcore US fans despite it being compiled and released without any input from the band. This, certainly, had been par for the course at Reprise. Just like The Beatles, The Stones and The Who – and pretty much all of the British bands – The Kinks had had their albums sliced ’n’ diced at will by the powers-that-had-been because those bozos presumably thought they knew better what would fly in the good ol’ US of A than their counterparts in the UK. And by that, I mean, you know, “We’ll cut a few songs from this 14-track album, take the tracks from some of the singles – hell! – even include a coupla tracks that were on the last album and bang! We got another way to make money off of these funny sounding English guys who probably won’t be around next year anyway.” The thing is, this compilation had so many sought after songs on it – lots of rare B-sides and songs lopped off their UK LPs – that the album became a pretty good seller, quite likely even cannibalizing sales of RCA’s current releases of new Kinks material (’71’s Muswell Hillbillies and ’72’s Everybody’s in Show-Biz). 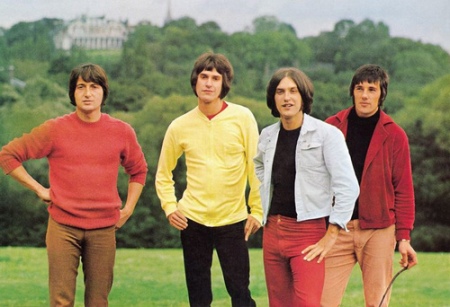 I don’t have an original copy of The Kink Kronikles to compare this new Record Store Day version to, but it sounds pretty phenomenal, cats. Besides that, the collection itself is a great mix of familiar and obscure tracks. Sure, you get “Victoria,” “Days,” “Waterloo Sunset,” “Lola” and “Sunny Afternoon,” but you also get once-super-hard to find goodies like “She’s Got Everything,” “Big Black Smoke,” “Mr. Pleasant,” “Berkeley Mews” and the then-unreleased “Did You See His Name?” There are 28 tracks here and they’re all worthwhile. Yes, today in 2020 they’ve pretty much all been added to the appropriate reissues of the band’s original albums, so if you’ve got the multi-CD sets of Village Green Preservation Society, Arthur or whatever, you have a good number of what’s here. But that’s no reason to pass on this limited edition, red vinyl reissue that’ll probably be deleted before you can say “Kinks reunion” for the umpteenth time. – Marsh Gooch