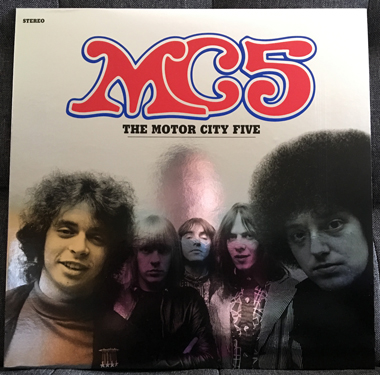 It’s oh so tempting to start this review with:

But that would be such a cliché. Everyone knows that that’s how they introduce the song “Kick Out the Jams” on the MC5’s debut album, Kick Out the Jams. Have I said “kick out the jams” enough times so far? Well, lucky for you, this album I’m reviewing here is called The Motor City Five, and therefore I won’t need to say “kick out the jams” again for another few paragraphs, I reckon.

This album is one of the first releases on a new label called Run Out Groove, a semi-crowdsourced label that ostensibly lets the consumer pick what they’re going to put out (via voting on their web site), then does a small, “craft” pressing of the winner, limited to however many copies they get pre-orders for. This release, ROGV-003, is limited to 2,668 copies, which can be bought via the above web site (though this one’s already sold out there), online or in-store. I missed out on ordering this one but found one at a local Seattle area plattery. Mine’s number #0989 for those keeping score at home. It’s pressed on high-quality 180-gram audiophile vinyl (clear with subtle red and blue swirls in it) and housed in a heavy duty Stoughton tip-on album cover – this one’s got that reflective silver foil material that’s so cool. (You can see a vague rendition of me hovering above the MC5 in these photos.) Each Run Out Groove release will be a limited edition, and though some will be reissues of existing albums (releases that only came out on CD, for instance), The Motor City Five is a compilation of tracks the MC5 recorded throughout their original run in the late ’60s/early ’70s. Let’s get into more about this specific release, alrighty? 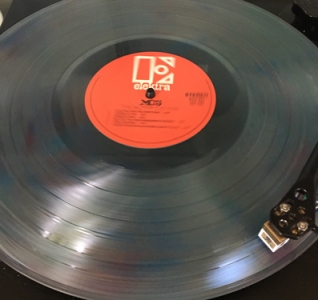 Kind of a shorter version of the CD compilation The Big Bang! Best of the MC5 (from 2000), The Motor City Five is a 12-track, 50 minute compilation with a couple of raw, pre-Elektra singles and then a selection of cuts from their three original albums from 1969 to 1971. Of course you get (you knew it wouldn’t last!) “Kick Out the Jams,” “Ramblin’ Rose” and “Rocket Reducer No. 62 (Rama Lama Fa Fa Fa),” plus later cuts like “High School” and “The American Ruse.” It’s a killer collection and a superb way to get into the MC5. Their hard rockin’, garage-y psychedelic goodness spawned many a great rock, punk and/or metal band (Stooges, The Dogs) – if you’ve wondered if all of those genres could co-exist in one band then here’s the proof. Few bands can or will ever stand up next to the MC5 in terms of sheer strength and energy. I never got to see them live but I can assure you that if the live cuts here – from their first album* – are any indicator, holy shit! I’m sure my whole life would’ve changed. 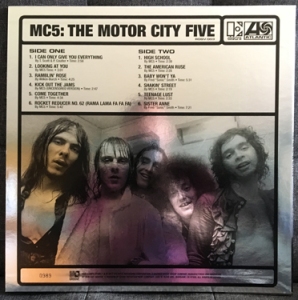 Overall this is an amazing account of one of America’s most kick-ass rock bands and a great start for a new record label (though it is an offshoot of Rhino). Yes, I found a couple of nits to pick – the notes on the insert refer to Detroit’s venerable Grande Ballroom as the “Grand Ballroom,” which wouldn’t really matter except that “Grande” is pronounce “grandie” by the locals – but they’re tiny little nits! Besides, you knew that I would find something to knock. It’s my job! That being said, I hope the quality of Run Out Groove’s future releases stays at this level. If it does and you buy ’em then you’ll be adding some seriously great records to your rack.

(* Their first album was recorded live and is called, ahem, Kick Out the Jams!)