Our boy WRECKLESS ERIC is on a tear with this, his second album in a year. Transience is its name and “if you think that what you see is what you get / you haven’t seen the half of it yet.”

Out on his own Southern Domestic label, this lo-fi release is a worthy sequel to last year’s killer Construction Time & Demolition. On that album Eric and his conspirators laid down practically off-the-cuff recordings of the man’s musings about where he came from, where he’s been to and where he was then at. Transience (“the state of lasting only for a short time”) finds Wreckless Eric doing the same, and still trying to shake off the adjectivity of his stage name – something he apparently has been working on for a long time. Yet, the very fact that the cuts on these two albums have such a ramshackle (but riveting) feel make the task of trying to shake the stage name’s burden a relatively unsuccessful venture. Luckily, no one picking up one of his albums is going to give a shit about whether he’s now or has ever been wreckless. People new to his stuff will only wonder slightly about where the name came from, and those of us who remember “Whole Wide World” and “Semaphore Signals” (among others) are fine with it. Seriously, Eric: who cares? We love the semi-shoddiness of your albums, your quirky wit and cynical view of (the whole wide) world. Transience contains sarcastic songs like “Creepy People (In the Middle of the Night)” where Eric talks about having a predilection for suffering and the drag of “taking it up the ass” (figuratively), “The Half of It,” which hooks into subject matter first sung about by Ray Davies of The Kinks and Eric’s contemporary (and former Stiff Records label-mate) Nick Lowe, and six more tunes that show he’s still… if not wreckless, definitely wry and feckless. And yet, he’s still capable of writing engaging songs about whatever strikes him: tiny houses, dead end streets (hello again, Kinks), indelible stains, whatever.

Working with Wreckless Eric this time are Steve Goulding (of The Rumour) on drums, amour Amy Rigby on piano and backing vocals, Cheap Trick’s Tom Petersson on the bass and Alexander Turnquist on 12-string. Transience has a full sounding, freckles ’n’ all vibe, with thick low end and raw guitar and organ that make for a fulfilling listen. I’m really digging his latest work and hope he not only tours the US again (saw him last year in Seattle), but maybe even with a full band. But whether he’s solo or accompanied, Wreckless Eric’s music is definitely worth delving into, if not devouring completely.

“All your records are shit, except maybe one…” So goes one of the lines in a song on the new album from WRECKLESS ERIC, Construction Time & Demolition. If you were around in the late ’70s you might remember a few of Eric’s releases on Stiff Records, home then to names like Elvis Costello, The Damned and Nick Lowe. Or maybe you’ve heard the cover of his biggie “Whole Wide World” (by Cage The Elephant). Eric was an oddball – he sang in a low register squeak that sounded like some weird guy’s speaking voice – and appears to have stayed one. But not all of his records are shit…

His new album is a beautifully ragged semi-lo-fi collection of remembrances of things like his childhood in Hull, England, and how the (whole wide) world seems to have been continually constructing and demolishing itself ever since. The opener, “Gateway to Europe,” tells of his hometown becoming that when a bridge was built that spanned the Humber Estuary and Britain became part of the European Common Market. (Look it up, I’m not a history teacher.) The arrangement of this song, as well as the rest of the eleven songs that make up Construction Time & Demolition, is one that sounds like it’s building up, getting denser and denser, while simultaneously kind of falling apart. Jagged guitars, weird organs and fuzz bass are at home among drums, percussion, and a “horn section” led by a brilliant trumpet blowing whenever some musical bit needs underlining. 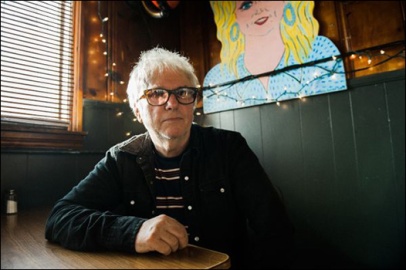 As Eric himself says, “I wanted the music to sound as though it was demolishing itself as it went along, and at times I wanted to actually hear it destroy itself, fuzz in and out until all that was left was the flat tone of a heart that’s stopped beating.” Well, now. That’s a grand concept and I think Wreckless Eric has achieved it. His lyrics remain wearily wistful in a jaded sort of been-there-done-that way, making canny observations about how getting older isn’t always easy (“life is all the same old lessons / until you learn ’em / And I’ve got so many lessons left to learn, I wish I could burn it all! / I’m coming unraveled here!”).

So how did Wreckless Eric fall off my radar? I mean, I loved his new wave records back then (see the clip below with his magnificent “Whole Wide World”), but he’s kind of come and gone over the last forty years. (I actually got to see him perform in NYC in the early ’90s during a New Music Seminar – met Cheetah Chrome from the Dead Boys at a bar down the street before the show and bought him a beer. Cheetah, not Eric. On my company’s dime.) Wreckless Eric’s had a few albums out in the last decade or so but I guess I just missed them. Meanwhile, he’s now stationed here in the States and has a pretty good thing going with this new record. You can catch him on tour if you live on the East Coast or in Britain. I hope he’s got a full band with him, and one that can deliver the goods and bads that make up Construction Time & Demolition. Meanwhile I’ll be looking into some of the records of his that I missed over the years. My bad.