Many of us think back on the ’80s and feel it wasn’t a very good time for rock ’n’ roll. Well, we are clearly forgetting about THE REPLACEMENTS! Listen to For Sale: Live at Maxwell’s 1986 and you’ll recall that it wasn’t all bad – in fact, some of it was absolutely killer.

Captured professionally after their major label debut (1985’s Tim), this very live recording features the classic Replacements lineup (Paul Westerberg, Bob Stinson, Tommy Stinson and Chris Mars) on an “on” night in Hoboken, NJ. If you know anything about this band and their near mythological live shows, depending on the night, they either were the best band on earth or they sucked big time. Representing the former – oh, thank heaven –this 2CD or 2LP release is quite possibly the Live at Leeds of our generation.

The set list this February night leaned heavily on tunes from Tim and their indie classic Let It Be, such as “Hold My Life,” “Bastards of Young,” and Westerberg’s awesome “I Will Dare,” sounding much more muscular in its live rendition (no Peter Buck on banjo!). There’s also an assortment of earlier hardcore fare such as “Fuck School,” “God Damn Job,” and one of my toppermost ’Mats tunes, Hootenany’s “Take Me Down to the Hospital.” I don’t wanna… die before my time… already used… eight of my lives…

For Sale also contains a number of cover tunes done the way only The Replacements could do ’em: unpracticed, spur-of-the-moment, warts ’n’ all. Witness “Fox on the Run,” the Sweet hit, which goes for about a minute (just past the first chorus) before it ends in a shambles. Elsewhere, “Nowhere Man” and T. Rex’s “Baby Strange” actually make it to completion, naturally in the rough ’n’ ramshackle manner these guys typically delivered.

All this is to say, if you need your rock music all polished and rehearsed, you probably don’t wanna shell out for this 30-years-overdue live release. But, if you’re a true disciple of The Replacements – and if you’re not, there’s something wrong with you, man! – then you will find this album to be the quintessential, missing chapter of the book of the story of Minneapolis’s true rock ’n’ roll hall of famers. Hello Cleveland! indeed. 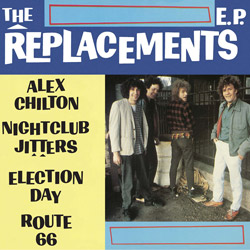 Originally released in 1987 as part of the campaign for The Replacements‘ second big league effort, Pleased to Meet Me, this EP is half teaser for the LP and half outtakes that didn’t make the album. This time, as a 10″ EP, it’s been released for Record Store Day 2015 just as the band (re-formed with two original members) go out on tour in the USA. “Alex Chilton” blasts out of the speakers like an ICBM, thanks to a detailed mastering job by someone who must appreciate the band’s ramshackle brilliance. The song’s about a guy you may have heard of who once led the power pop underdogs Big Star (and was the teenage lead singer of The Box Tops), and it’s one of the best tunes on the aforementioned LP. Up next is “Nightclub Jitters,” another album track that’s loaded with Paul Westerberg’s reality-based observations on dating and a nice standup bass line. (It actually stands out nicely on the vinyl, even when you consider the tracks were recorded in the infancy of digital.)

Outtakes make up side two: “Election Day” is a slow blues with a powerful slide guitar lead that could have been on the album (which only had eleven songs) though it does feel slightly unfinished. Next the band covers “Route 66” in a throwaway piss-take complete with wrong lyics that’s pretty enjoyable but certainly not a vital part of the band’s legacy—it’s perfect for a B-side.

In all, a nice 4-song platter that makes a tasty appetizer for the record that was The Replacements’ greatest main course.