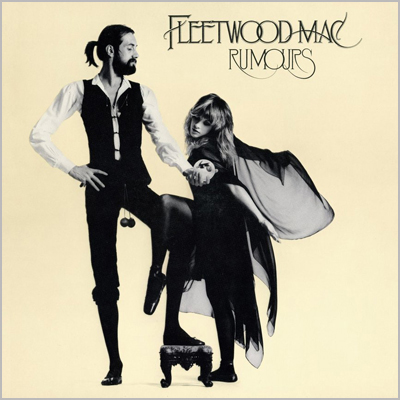 Yikes! 40 years ago this week one of rock’s undisputed greatest albums of all time was unleashed on the world. FLEETWOOD MAC‘s Rumours would go on to sell some 45 million copies globally and permanently chisel the band’s name into the figurative stone tablet of rock’s quintessential records.

So much has been written about the band and this seminal album that it’s hard to come up with anything about them that hasn’t already been said. But I have so many memories that are tied up in the band/album that I had to list them for myself just to pick a few poignant ones. I started my first band in 1977 with my pals Mike and Jerry in Cypress, California (Orange County for those keeping score at home). The three of us tried our best to learn songs we liked (“Smoke on the Water,” I believe, was first – and it was all riff and nothing else!) The band soldiered on, and by the time Jerry moved we had added two girl singers, Sharlyn and Dee Dee, and once Mitch replaced Jerry we were 3 guys + 2 girls = teenage Fleetwood Mac. I don’t remember if that was a conscious idea or whether it just happened that way, but indeed it was very handy. How better to reproduce our own versions of “Dreams” and “Gold Dust Woman”? We had the exact same makeup, because Sharlyn sang and played piano and Dee Dee sang and played guitar. I’m not trying to say we were able to even partially capture what the real Mac was, but we at least had the parts. So there’s that.

Later that year my dad asked me to play a song on the guitar for my great uncle Sam (that was his name, I kid you not). I didn’t know what to play – what guy his age would know any of the songs I could possibly come up with? I didn’t think he’d know “Rocky Raccoon” or “A Horse with No Name,” so after wracking my brain, I read the lyrics to Christine McVie’s “Don’t Stop,” one of the tunes she sings on Rumours with heavy assistance from Lindsey Buckingham. “Don’t stop thinking about tomorrow / Don’t stop, it’ll soon be here / It’ll be better than before / Yesterday’s gone, yesterday’s gone.” Oh lord. The thought didn’t dawn on me then, but much later: Was I telling my uncle Sam to just let go? Well, I don’t know how lucid he was at the time (I remember he was in hospice and I played for him sitting in a chair near his bed), but he might have heard it that way. I was just a kid, thought it was a pleasant sounding song, and it was pretty easy to learn. (It helped having the songbook with all the chords!)

Like thousands of kids my age I had photos of the band plastered on my bedroom walls (along with Wings, ELO and Linda Ronstadt), favoring those that had Stevie Nicks in them. Rumours became one of those albums that I can quote without even thinking about it. Despite hearing most of its songs literally thousands of times, it’s an album that I never get tired of. 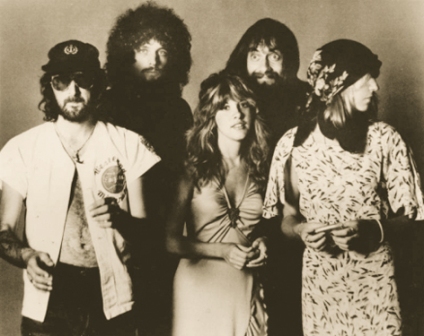 A year or so ago, while watching the Classic Albums DVD on the making of Rumours with my wife Sarah, I had a weirdly emotional moment. They were discussing how they recorded Christine McVie playing the piano part for “Songbird” in an auditorium on the UC Berkeley campus. At the time I was coming to a reckoning about some personal issues of mine that were making my relationship with my wife difficult. Laying on the couch with my head in her lap, I began crying. Big boys don’t cry. But there I was, 50-something, bawling in Sarah’s lap. Something about that beautiful song. “I feel that when I’m with you, it’s alright… And I love you, I love you, I love you like never before.” I think Christine was trying to tell me something. Listen to me: don’t mess this up. She is your songbird! And Good Lord. The very moment I’m writing this the freaking sun comes out after raining hard all morning. It turns out that Christine, like the songbirds of which she wrote, knew the score.

These days when I put on Rumours I listen to a pressing of the album that was done at 45rpm on two records. It’s an audiophile edition that came out in 2009, pressed on 180-gram vinyl and designed to bring out more of the nuances in the music that can get lost in lesser, shoddy pressings. And, indeed, you get more of the shimmer of the voices, more of the crystalline timbre of Buckingham’s underrated guitar playing and even more of John McVie’s killer bass lines and Mick Fleetwood’s kick ’n’ snare than on other editions. If you can find this pressing, and you’re not worn out by the continued ubiquity of this record, you should get a copy. That’s not to say that the 2CD reissue and the later box set aren’t worthy of your attention, as they both have many of the demo and live versions of the songs that give you a better idea of what it took to bring this baby to life and what it sounds like live. You can go your own way – pick the version that works best for you. All I know is, in one form or another, for me Rumours is going to be there until the end.