Supergrass • In It for the Money [3CD]; Super Furry Animals • Rings Around the World [3CD] 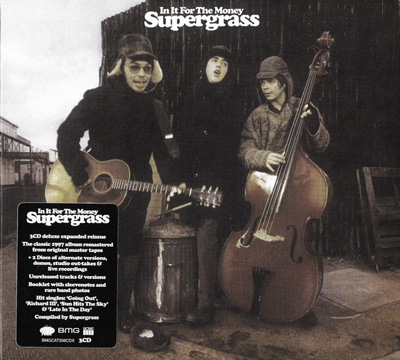 Two British bands, both with “super” in their names, and both celebrating the more-or-less 20th or 25th anniversaries of one of their best releases. For SUPERGRASS, In It for the Money is nearly a quarter century old and comes in a remastered version bolstered by B-sides, demos and a live disc featuring most of the album’s tracks. SUPER FURRY ANIMALS’ Rings Around the World is twenty and also comes in remastered form with B-sides and demos, but instead of a live set we get an entire disc of remixes. Both releases are excellent, and at least on the CD versions, overflowing with Britpop goodness.

Supergrass’ sophomore effort was light years ahead of their debut, I Should Coco, which suffered from a clumsy name and a narrow breadth of music (loosely then-considered “punk” but not quite). In It for the Money was a blast when it came out, and I have to admit – though it pains me to do so – I didn’t like it at first. It was my first experience with ’Grass and I thought it sounded either a) derivative [of what, I don’t remember!] or b) everywhere at once. After repeated listenings, though, I came around. I guess I figured out what they were going for and its power/Brit pop vibe was both focused and all over the place… in a good way. Harder rockers like the title track, “Richard III,” “Tonight” and others sat alongside “Late in the Day” and “It’s Not Me” and altogether obliterated the probably derogatory punk designation that Supergrass initially earned. They could have collectively choked with such a hold around their necks, but the band cockily flipped off the critics and delivered a downright classic alternative rock record. 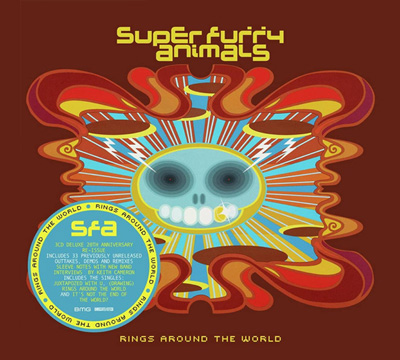 For Super Furry Animals, their first major label outing benefited from a much larger budget and near unlimited time in a big league studio. Rings Around the World was more expansive than anything they’d done before, a little more electronic and a little more pop simultaneously. The lengthy album came with power-poppy tunes like the title track, nu-pop/soul like “Juxtaposed With U,” and the ballad pop of “It’s Not the End of the World.” It may now seem like a pretty lengthy album (it was released when vinyl was nearly dead) but it’s all very good so it’s really a moot point. The major label budget gave the band a chance to not only record nearly three single LPs’ worth of material, but to actually produce a 5.1 surround mix of the entire album and videos to go with it. (Sadly, you don’t get a disc with that material in this set but they can be had via the internet.) They also had a host of remixes done and most of those are here. I wouldn’t say those remixes are must-haves but they do give a good idea of what kinds of ideas and sounds the Furries’ heads were swimming in at the time.

Both Supergrass and Super Furry Animals’ deluxe CD sets are loaded with great material, and both are also available on vinyl – and in various configurations including colored vinyl variants, versions with bonus discs, etc. I opted for the compact disc versions of these in order to get all the goodies (and I already have one of them on vinyl anyway) and maximize my expenditure, but you may want to go the wax route if you’re in it for the vinyl. Whichever way you go, you’ll be investing in releases that represent absolutely the best stuff both bands ever did.
– Marshall Gooch