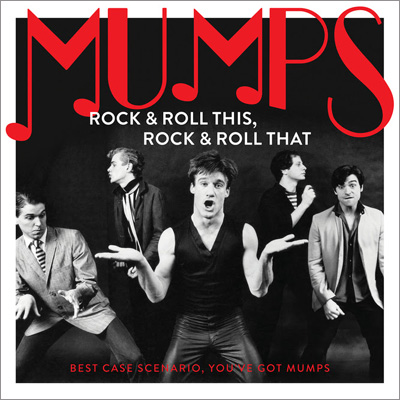 What kinda band do you get when you mix (more or less) equal parts Sparks, Bowie, New York Dolls, Skafish and Dickies? Before you answer that, let me just say that I am aware that many will accuse me of committing the oldest “lazy rock journalist” cliché in the book by starting this review that way, and that I honestly don’t care.* Answer: MUMPS. Rock & Roll This, Rock & Roll That: Best Case Scenario, You’ve Got Mumps is the third compilation of tracks by the band, and considering I had barely heard of them before word of this comp got to me, you could say “third time’s a charm” in terms of me finally giving this group a spin. That is, if you’re prone to carelessly uttering clichés…

Well, what we have in the case of the Mumps is a mid ’70s New York rock band that came up via the CBGBs scene, made up of a handful of guys who got together in Mrs. Loud’s equal opportunity garage and took a shot at creating their own kind of music. Their lead singer, Lance Loud, had come out as gay on national television in 1973 during an episode of the PBS documentary series, An American Family. (This was before people got paid to appear on “reality TV” and pretty unheard of at the time, kids.) At the same time he was starting a band, sometimes called Loud, which eventually morphed into Mumps. There’s a lot of interesting history and plenty of great anecdotes about their exploits in the liner notes here, but suffice to say that though the band was clearly one of the better bands on the scene, they are – today – certainly way less known than Talking Heads, Ramones, Blondie, Television, et. al. Regardless of their actual popularity, Mumps deserves to be heard.

As you may remember from the opening of this review (oh, so long ago), they mix rock, punk, musical theater and more in a Rocky Horror Picture Show meets new wave combo that must have been pretty cool to witness in-person. In fact, it’s likely that the songs here that seem a bit over-the-top in the drama sweepstakes were probably quite exciting on stage. Think of Queen, if that band were more lighthearted, yet socially-conscious and a little less polished. Or maybe Sparks without the brother. (You pick which one…) With lyrics like “I wish I could’ve seen your face before the accident” – just one of the severely smart-assed variety – you can bet that these guys, or at least Lance Loud, were probably the clowns in their class. And if you weren’t of the “I’d like to punch that guy in the face” persuasion then you probably would’ve dug having any of the Mumps in at least your most-boring junior high period. The LP version of Rock & Roll This… is a 14-track affair, while the CD adds 9 more (all very worthwhile), including two never-before-released Loud tracks. Releases like this ought to give you reassurance that, just when you think you’ve heard every band you should have, there’s always the likelihood of you catching something as bad – and by that, I mean good – as the Mumps. – Marsh Gooch

* What kind of rock critic do you get when you mix equal parts “I don’t care what you think” and “I sincerely hope you think I’m a genius”? (Picture me using both hands to point back at myself) THIS GUY!