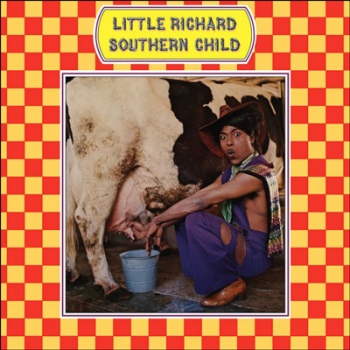 This Fall Omnivore Recordings undertook a five-prong LITTLE RICHARD reissue campaign that culminates in Southern Child, a not-released-at-the-time album receiving standalone LP reissue for Record Store Day’s Black Friday 2020 event. (A CD will follow.) That record and the other four were all recorded for Reprise and Warner Bros. Records between 1970 and 1986, but this 1972 album went unreleased until Rhino Handmade issued it as part of a multi-album retrospective in 2005. Southern Child, a funky little country album, was handed to the label and promptly shelved for The Second Coming, recorded at about the same time but very different from the shunned LP it was birthed with. Strangely, both albums have some real good material on them so it’s not clear why one was picked over the other, although maybe it was the former’s titillating cover, which was concocted and approved at the time (the album even had a catalog number and release date on the books) but wasn’t exactly commercial. But backing up a bit…

Little Richard was signed to Reprise at the beginning of the ’70s and enlisted Bumps Blackwell and FAME Recording studios in Muscle Shoals, Alabama to record The Rill Thing, which spawned a Top 40 single in “Freedom Blues,” but failed to do much more than that, despite critical acclaim.

Album tracks included back-to-back covers of both The Beatles and Hank Williams as well as some funky R&B that showed Richard wasn’t sticking to the ’50s style rock ’n’ roll that he pioneered. Undaunted, in 1971 the true King released King of Rock and Roll, similar in vibe but with a more varied handful of covers (The Stones’ “Brown Sugar”, CCR, Hoyt Axton/Three Dog Night, Hank Williams again). Despite its absolutely awesome cover it failed to chart or sell much.

For 1972’s The Second Coming, Little Richard and Blackwell decided to record in L.A. at The Record Plant. The album has a very funky sound, sorta pre-disco in places with some great horn charts, clavinet and more. The musicians assembled represented both Richard’s past (Lee Allen, Earl Palmer) and L.A.’s present (Sneeky Pete Kleinow, Chuck Rainey). Alas, the album – bolstered here by bonus tracks including single edits – did just about nothing to boost our hero’s visibility and it wasn’t until 1986 that Little Richard came back to rock with Lifetime Friend (he had done one gospel-focused record in the meantime) for Warner Bros. (Reprise’s parent label).

The album was a mix of rock ’n’ roll music and pseudo-spiritual lyrics – even some rap! – and had the original version of “Great Gosh A’Mighty,” co-written with Billy Preston and, when recut for the movie Down and Out in Beverly Hills, a near-Top 40 single. Most of the songs have a decidedly Eighties sound that is a bit off-putting today, sorta the way those ’70s records sounded dated to us in the Nineties (though they now sound pretty cool).

Omnivore’s seen to it to add plenty of bonus tracks to those four CDs, and for Southern Child’s CD issue they’ve provided some early takes of album track “In the Name” and an outtake of a little thing called “Sneak the Freak.” (The yellow vinyl Record Store Day version lacks these extras.) Whether you’re going to want these depends on a lot of things at this juncture in time, but I’d say big fans of Little Richard will find them pretty fun to put on for a change of pace from “Tutti Frutti” and the other classics we’re so used to hearing. Casual fans may not find these releases to be, ahem, the rill thing when it comes to Richard Penniman’s alter (or is that altar?) ego… – Marsh Gooch