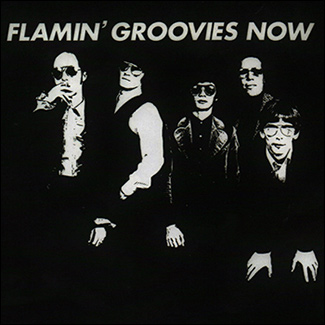 See also: Flaming Groovies, Flamin Groovies. However you wanna spell or punctuate the name, the FLAMIN’ GROOVIES were an American band that wore their Anglophile leanings on their sleeves – or was it collarless Nehru jackets? Or was it the trousers?? Two albums from their classic late ’70s period were quietly released on CD earlier this year and after finally receiving copies of them I’m writing a few words on their behalf.

1978’s Now was their second with Sire Records and with Dave Edmunds producing. While it was still one helluva semi-power-pop album, it lacked a “Shake Some Action” or “Teenage Head” to buoy its greatness. In fact, except for “Yeah My Baby,” it is Now’s cover versions that make it a worthwhile Groovies disc. “Feel a Whole Lot Better” feels a lot like the Byrds’ version, as does “There’s a Place” to the Beatles’ original, while “Paint It Black” feels Groovier than the Stones’ hit. The album didn’t do much to propel the band’s career, though, so in ’79 they were back with Jumpin’ in the Night, which is practically a cookie-cutter copy of Now. Sadly, though the band’s Cyril Jordan produced (with Roger Bechirian), neither the band’s originals nor their choice in covers were as good as those on their previous outing. “Werewolves of London” is a great song but this version’s not very flamin’ or groovy. “Down Down Down” is a lot like the version Dave Edmunds recorded so it’s pretty good, as is their cover of “Please Please Me” (you know who did it), and “Absolutely Sweet Marie” is a shade peppier than Dylan’s but nowhere near as awesome as Jason and the Scorchers’ later take. I don’t find any of the band’s originals all that interesting this time around. 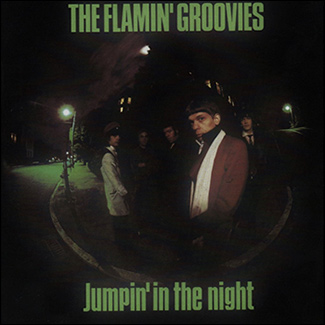 In all, both Now and Jumpin’ in the Night are fairly entertaining – neither, though, is as good as Shake Some Action. That 1976 album was not reissued with these two, for some reason, even though they all were originally issued by Sire. Peculiarly, Liberation Hall has issued these two without bonus tracks (not that there are that many, as far as this Flamin’ Groovies fan knows), but they did seem to do a nice job of mastering. (Attributed to Gary Hobish on the latter but not credited at all on the former.) The packaging is pretty bare bones, with very light liner notes and plenty of typos. I’d say Alec Palao’s text in the former is more informative than Steve Wynn’s in the latter, though those are more entertaining and curiously dated to January 2005! I get the feeling that – at least with the packaging – these two CDs were thrown together quickly. Here’s to hoping that the label creatives pay a little more attention to whatever they currently have in the hopper. – Marsh Gooch