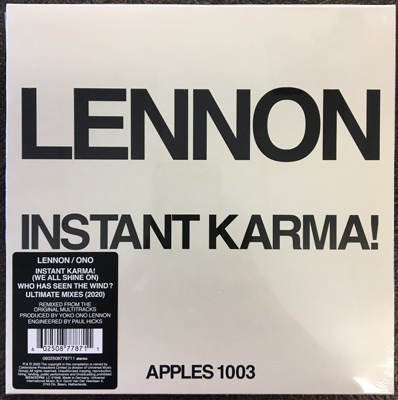 Another Record Store Day 7″, JOHN LENNON’s “Instant Karma!” b/w YOKO ONO’s “Who Has Seen the Wind?” is not exactly a reissue of the original 1971 single. This time it’s a pairing of 2020* remixes of the songs, in line with the 2019 remix of Lennon’s Imagine album (also recorded in ’71). Apparently held over from that release – after all, RSD was supposed to be in April – as a reminder about the availability of the aforementioned remix LP (these tracks aren’t on it or any of the box set versions), this 45 is housed in a similar “picture” sleeve and dons near-identical Apple labels and the original UK catalog number. (The lengthy, modern UPC barcode and catalog number are, of course, unique to this release and thankfully printed only on the outside hype sticker.) This “ultimate mix” of “Instant Karma!” isn’t that different from the original, though it does seem to make the individual instruments stand out on their own a little better, with Klaus Voormann’s bass and Alan White’s drums a bit tighter. Back then, Lennon, Ono and co-producer Phil Spector went for a much denser, Wall of Sound-esque mix than what we’d consider good today. Still, if you’re not intimately familiar with the original you really have to squint to hear the difference between the ’71 and ’20 mixes.

As for Ono’s “Who Has Seen the Wind?,” I am honestly not familiar enough with it to hear the differences between the original and today’s remix to weigh in. Sorry, Yoko! I’d certainly heard the song before (I have an original pressing of the single), but was never as interested in repeat listenings of it as I was of the A-side, which is not only a stone cold classic but was also a worldwide hit and has appeared on numerous Lennon compilation albums over the last fifty years. But I can tell you this: these 2020 remixes are for the hardcore fan (as you’d basically expect) and not the casual listener. This trend of remixing classics is getting a bit tedious, really. I mean, especially in the case of something like “Karma,” which suffered a bit from a crummy mix, why not really go for it and do something radically different? Or at least noticeably different?! – Marsh Gooch