Forty years ago hardly anyone knew who THE SOFT BOYS were. These days there are plenty of people, highly schooled on obscure rock bands, who know that the band was a late ’70s British “punk” group fronted by Robyn Hitchcock, who later went on in the ’80s to front a group called The Egyptians and then out on his own to continued relative success as a relatively eccentric singer/ songwriter. I Wanna Destroy You is a 40th Anniversary double 45 package of The Soft Boys’ two 1980 singles, whose A-sides – “I Wanna Destroy You” and “Kingdom of Love” – were two of the best tracks on their Underwater Moonlight album, and whose B-sides weren’t part of that album. Now you can get a real handy 2×7″ set that replicates those two singles as one of this year’s Record Store Day releases.*

“I Wanna Destroy You,” of late, has become a bit of a political song thanks to it being used as a theme for those wanting to sack certain US presidents (including our current leader, He Who Shall Not Be Named, But It Rhymes With DUMP). This hard-rockin’, Byrds-meets-punk tune still thrills me, some 35+ years after I first heard it. B-side “I’m an Old Pervert (Disco)” is a slightly different take or recording of a tune that appeared as just “Old Pervert” on the aforementioned LP. Not a bad song but definitely a flip side. Meanwhile, Near The Soft Boys was a 3-track 7″ EP that contained not only the A-side/LP track “Kingdom of Love,” but a strange little ditty called (natch!) “Strange,” and a real hot cover of a never-officially-released Pink Floyd tune, penned by the strange Syd Barrett, called “Vegetable Man.” 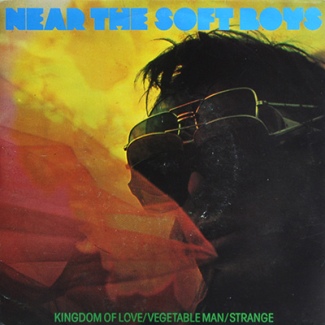 What made this cover tune so great were these two factors: 1) Only the most hardcore of Floyd fans knew about it, as it had only been available on pretty bad sounding bootlegs, and 2) The Soft Boys’ version really fleshed out the song with a complete arrangement including harmonies and the lot. When I first got a hold of this single (a battered copy, I might add), I assumed it was a Soft Boys tune, despite the writer credit inside – I was still a novice Pink Floydian at that point. This version is so good, it’s a wonder that Syd’s band never finished it and put it out as a single. Well, I mean, the chances of a song called “Vegetable Man” becoming a hit might have been slim and none, then and now, but you get what I’m saying.

Anyway, this I Wanna Destroy You double-7″ is available at independent record stores this Saturday, 8/29/2020, and after that, wherever you can find a copy in-store or online. Though the five songs are now readily available on CD, this is a nice package that also includes a digital download card in case you wanna add them to your iTunes library – which you will, unless you’re some kinda vegetable man… or woman. – Marsh Gooch

* Record Store Day 2020 has been split into three dates, the first being 8/29/2020 with the next two to follow in September and October, thanks to this year’s coronavirus pandemic.