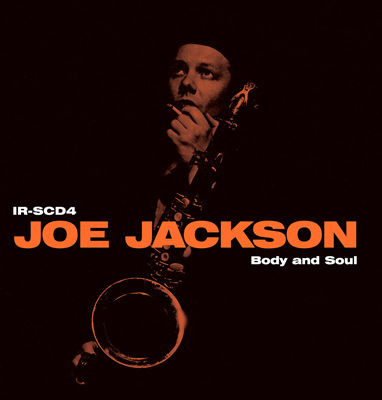 Another hybrid SACD/CD release from Intervention Records is JOE JACKSON’s Body and Soul. The 1984 album was the followup to his acclaimed Night and Day album (which featured the hit “Steppin’ Out”) and had his next – and bigger – hit, “You Can’t Get What You Want (Till You Know What You Want)”. This was another digital recording, too, this time recorded at a Masonic Lodge in NYC. Sometimes these early digital recordings can sound great, and other times time isn’t too kind to them. This one is a happy occasion for lovers of Body and Soul, as Intervention’s SACD/CD hybrid presentation treats the outing with respect and glorious results.

Jackson had shunned his angry New Waver persona by the time he got together again with old friends David Kershenbaum (co-producer) and bassist Graham Maby, as well as new colleagues Vinnie Zummo (guitar), Ed Roynesdal (keys/violin) Gary Burke (drums), singers Ellen Foley and Elaine Caswell, and horn players Tony Aiello and Michael Morreale. The material was of a more jazz bent, with more swing than Joe’s typical thing (not counting the full-on jump jazz homage, Jumpin’ Jive) and yet still coming from a pop place. There were no growly “I’m the Man” type rockers this time out, Joe moving into the more mature and thoughtful territory of songs like “Not Here, Not Now” and the aforementioned “You Can’t Get What You Want.” I can’t say it’s all good, though, as I find “Go For It” to be quite tedious (unless he’s being super sarcastic?!) and a few others to be mediocre for the man. Still, there’s also “Be My Number Two” (second best song on the album?) to round out the good ones.

Body and Soul is a full sounding recording, and the new SACD brings out all of the body and soul in Joe Jackson’s musical arrangements. Certainly the production can be credited for that, but also the new mastering by Kevin Gray, whom I have celebrated here before (see my review of the Flying Burrito Bros.), really shines. Intervention has a number of Joe Jackson’s releases in their catalog, either as SACD/CD discs or as beautifully rendered vinyl reissues (including Look Sharp!, I’m the Man and Night and Day) and they’re all worth the money. So if it’s high fidelity sound you want, and you know that’s what you want, you can now get it. Get it? – Marsh Gooch

One thought on “Joe Jackson • Body and Soul [SACD/CD]”