[This review was originally published 5/20/2010 on my old blog, Skratchdisc.]

The first official live release from the original lineup of San Francisco’s legendary, infamous, underrated, greatest rock band, MOBY GRAPE, is not the live album we’ve all been waiting for. Moby Grape Live is a collection of songs recorded before festival crowds and less between ’66 and ’69, and there are some incendiary performances here. But there’s something missing, something that would have given this release that little push over the cliff that would have made it a must-have classic. Maybe it’s context…

For one thing, the disc (or 2LP set) is made up of songs from four different shows, recorded mostly in mono (not that that matters) from soundboards and the like, so the sound quality’s decent but not great. The final cut, “Dark Magic,” is from New Year’s Eve 1966 at the Avalon Ballroom in San Fran, and is fabled for never having appeared on any of the Grape’s albums. It’s also a long one (that’s getting rather personal, isn’t it?), at 17+ minutes, but it’s a good jam and was probably quite awesome if you were on LSD or something when you heard it. I was on a Diet Pepsi, and I still got a kick out of it. There are also two versions of “Omaha,” one from the Monterey Pop Festival (’67) and one from a Netherlands broadcast in 1969 (and that one is KILLER). I also really dig “I Am Not Willing” (originally from the studio album ’69) with its heavy guitar attack and longer, more rockin’ arrangement. But as I said, something’s missing.

Is what’s missing a tuner for the one guitar on the Netherlands cuts that is nearly unbearably out of tune? Is it the not-quite-as-tight-as-I’d-have-it-ness of the playing? Is it just the lack of suita 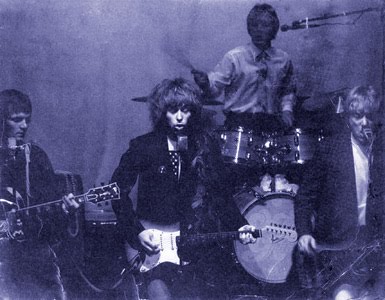 ble drugs to make me understand what it was all about? (I was barely 4 years old in 1967…) Or is it all of the above? Well, that all being said [or asked –ed.], this is a live album worth having, especially if you already like Moby Grape. If you don’t know them yet and you’re trying to figure out where to start, this isn’t the place. Get Moby Grape, their debut from ’67, and then proceed to Wow and ’69. Sundazed’s The Place and The Time from last year is also a good one, a double album with lots of different flavors. And if you’re a vinyl lover, note: You can get this on 2LP black vinyl or ultra cool 2LP purple vinyl, but really, the cost doubles from CD to vinyl and doubles again from black to purple wax, so you’ll want to dip your toe in before you cannonball.