Here are a couple of releases that are coming out for Record Store Day 2020 (now post-poned to June 20), on limited edition vinyl, but are actually out on April 24th on CD and as digital downloads.

ANDREW GOLD‘s Something New: Unreleased Gold is a collection of early demos – recorded both solo and with a band – prior to him getting a deal with Asylum Records, where his first album came out in 1975. These ’73 recordings definitely encapsulate Gold’s folky tunes (especially the ones recorded solo on acoustic guitar), foreshadowing the smooth voice that sang later hits “Lonely Boy” (which I had on 7″) and the theme song to The Golden Girls TV show, “Thank You For Being a Friend.” The recordings themselves are quite good, having been recorded by professionals in an LA studio, and the bulk of them are Gold singing to solo piano or guitar (sometimes with his own double-tracked or harmony vocals). If you’re a fan of Andrew Gold and his mid-’70s LA folk-scene style, then this might be a fun diversion to take your mind off things. 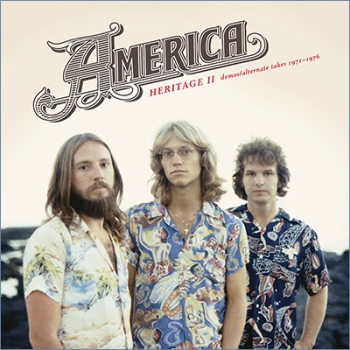 AMERICA’s Heritage II: Demos/ Alternate Takes 1971-1976 is a similar affair, a second volume of the three-man band’s original recordings of songs that (mostly) appeared on their mid-’70s albums Holiday, Hearts and Hideaway (they got a little “H” thing going with those titles). At the controls for most of these tracks were producer George Martin and engineer Geoff Emerick, two who are well-known for their work with The Beatles (for starters). I’m not a huge America fan so I don’t recognize most of Heritage II’s songs from their released counterparts, but there are some tunes on here that many of us would know, like the rough mix (with no lead vocals) of “Tin Man,” which was a big hit for them in 1974. Another highlight is “Jameroony,” a nearly 13 minute acoustic guitar jam that Americaphiles had only heard of until this new release came out. It’s a real nice jam session, alright, reminding me of the way my step brother Dave and I (and sometimes our dad, Denny) would play our acoustics together. It was usually Dave who did the soloing – he was much better than me and I seem to remember Denny wasn’t really into soloing – and we weren’t nearly as good together as Gerry Beckley, Dewey Bunnell and Dan Peek were. You can tell these three spent a lot of time playing together, the way they play off of each other and anticipate where the current soloist is going. I’m drawn to this album for that and because of the fact that, at about 11 or 12, I learned how to play America’s “A Horse with No Name” on the guitar and it was likely the first song I knew all the way through. (It was either that or The Beatles’ “Yellow Submarine”). Anyway, you get a baker’s dozen of the band’s demos on this collection, available now on CD and on limited edition vinyl come Record Store Day in June (or whenever it ends up happening, coronavirus restrictions pending). — Marsh Gooch