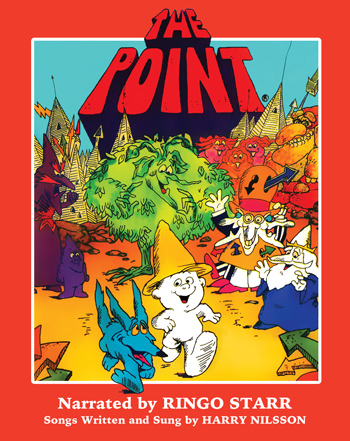 You could say that, in these modern times, there’s no real point to reissuing Harry Nilsson and Fred Wolf’s THE POINT animated TV special on home video, but that would be missing the, ummm, point. This hour-plus show was cooked up by Nilsson, who not only came up with the idea but – naturally – wrote and performed the songs that crop up throughout. MVD Visual has just released it on Blu-Ray video and though it’s not perfect, it’s pretty dang good.

The Point is a fable about a boy named Oblio. Boy is born, boy is different, boy is ostracized, boy is found guilty of being born “without a point,” but “the law is the law, and without the law there’d be no lawyers, and well, it just goes on and on and on,” boy is banished, meets a bunch of weirdos in the Pointless Forest (including The Rock Man), boy comes back from his travels (not exactly the prodigal son, since he is basically a smart, good boy), boy is celebrated because everyone finally gets it: We should all be treated nicely and fairly because, after all, people are people so why should it be… oops, my bad, that’s Depeche Mode.

Anyway, the animated show ran on ABC TV here in the US in 1971, supposedly the first animated full length movie to air on television. Many of the animated sequences and concepts owe a debt to Nilsson’s pals, The Beatles, and their Yellow Submarine movie of just a few years earlier. Nilsson himself wrote all the songs and performed them, including the hit single “Me and My Arrow” (about Oblio’s dog) and the then-overlooked but now fêted “Think About Your Troubles.” The “soundtrack” album came out a few months before the TV show and featured Harry’s own narration.

When The Point ran on TV the first time it was narrated by Harry’s pal, Dustin Hoffman, as a one-off. After that it was narrated by another guy, and then when it was coming out on home video (originally VHS), Harry got another pal, Ringo, to handle narration. That’s what we have here, and Ringo’s a capable narrator. (Supposedly there are no copies [of replication quality, at least] of Hoffman’s narration available.) This new Blu-Ray is what I’ll call gently restored. It’s not a pristene, frame-by-frame restoration but they apparently got rid of the most egregious bits of bother (don’t let the very beginning seconds fool you). The color quality has been made consistent and the sound is pretty good, too.

MVD Visual has loaded The Point with lots of extras, including mini-documentaries about Nilsson and including some of the voice talent and director Fred Wolf. I’m sure it was cheaper to film and edit the extras than it would have been to do a first class restoration, being that this isn’t exactly going to be a huge money maker, and the extras are interesting, so it’s all (pretty) good. Besides, any time you get a chance to check out an old favorite – either The Point, itself, or Harry, himself – that makes it worth it. — Marsh Gooch