The Damned • Black Is the Night – The Definitive Anthology [4LP, 2CD] 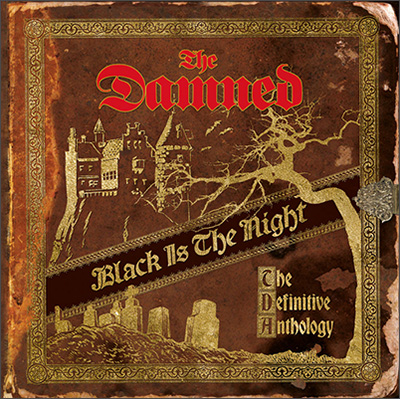 There’s no way in hell anyone would have ever guessed that a scruffy punk rock band called THE DAMNED would one day have their oeuvre compiled countless times by the year 2019, but it’s happened. Black Is the Night – The Definitive Anthology is the latest compilation, and it brims over with 39 songs over 4 LPs or 2 CDs that span from their first single, “New Rose,” released in 1976, to songs from their 2000s studio releases and even a brand new one (the title track)! That the band’s best stuff pre-dates the 21st century barely matters. I say barely… and if you read on you’ll understand why.

If you don’t know much about The Damned, you can see some of my other reviews of Damned-related releases to help fill in the blanks (click here). Let it be understood that I’m a BIG FAN – I tell people that I love ’em even more than The Beatles and that’s 50% true half the time – but I DO have misgivings about some of the material they’ve released in their nearly 45 years of anarchy, chaos and destruction. For instance, back in the ’90s, after numerous personnel shifts ’n’ changes, they released an album called I’m Alright Jack and the Bean Stalk (aka Not of This Earth) and I couldn’t find much of anything to like about it. And their latest album, Evil Spirits (2018), was such a letdown that I chose not to review it here because I didn’t want to “dis” on my favorite band! (“Standing on the Edge of Tomorrow” from that release is included on this new compilation.) Yet. The Damned – Captain Sensible, Dave Vanian and all the others – are a many splendored thing. Whether it’s the early punk of “Neat Neat Neat” or “Love Song,” the punky new wave of “I Just Can’t Be Happy Today” or “Bad Time for Bonzo,” the goth of “Grimly Fiendish” and “Shadow of Love,” or the sheer brilliance of “Stranger on the Town,” “Curtain Call” and “Smash It Up (Parts 1 & 2),” the band is so much more than the sum of their parts or their discography. (Still, I don’t see how they chose “Fun Factory” for inclusion on this compilation but left off “Lovely Money.”)

Black Is the Night gathers most of their greatest moments in a very nice package. The initial copies of the 4LP set are pressed on gold vinyl, housed in a gatefold cover and cloaked in printed inner sleeves. A band family tree created by the late, great Pete Frame is featured on an included insert to help you keep track of just who was in the band at any given time, but it only goes up to 1982 so it’s woefully incomplete. The cover was designed by graphic design guru Phil Smee, the liner notes are kinda snappy (written by Vive Le Rock magazine’s Eugene Butcher), and the credits come up short of crucial information such as who produced the songs or who did the mastering. Considering the colossal difference in their records from 1976 to the most recent title track (available only on this collection), it would be nice to know who to praise or blame for that. It’s generally a pretty good mastering job, though the sound on some cuts is a bit muffled, and there are some jarring segues where one song slams into another (even chopping off the last few seconds of “Alone Again Or” as “Lively Arts” starts!), which leads me to believe that this collection was culled from digital and not analog sources. 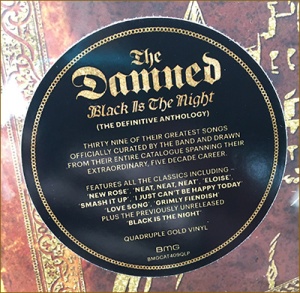 Of course, you’d expect that since the 39 songs come from various and disparate sources. Still, the songs aren’t in strict chronological order so the difference between, say, “Eloise” and “Plan 9 Channel 7” isn’t as drastic as you’d think it could be. As Dave Vanian says at the end of the liner notes, “The Damned have been on an epic musical adventure. To have spent years and years making the same album was never part of the plan.” That they would make so many great LPs and singles may not have been, either, but they certainly did.  — Marsh Gooch