NICK LOWE has latched onto a new way of making records in the last few years, and it’s a method that suits him. Instead of waiting until he’s got an LP’s worth of tunes, Basher has been releasing EPs of whatever he deems ready to record. Love Starvation/Trombone is his latest, another 4-song affair recorded with Los Straitjackets and released by his American label Yep Roc.

What’s great to hear is that Lowe has also landed on the perfect latter-day band to collaborate with. Los Straitjackets, those guys with the gimmicky Mexican wrestler masks, provide an expertly empathetic two guitars, bass and drums backing to Nick’s rockabilly tinged pop tunes. They’ve now appeared as his band on a couple of Christmas records and last year’s Tokyo Bay EP. Like those efforts, there’s nothing too slick or too raw here, unless you count the studio-enhanced “horn section” on “Trombone,” the co-title tune that features a ’60s almost-Tijuana Brass arrangement. “Love Starvation” itself is a typically Nick mid tempo rocker with some witty words, while “Blue on Blue” is a sleeper of a slower “blues” song, with some of his greatest, latest lyrics, like “I can’t sleep for all the promises you don’t keep / I wanna run but I’m in too deep, too deep for blue on blue” and “In my mind I’m on the end of a ball of twine / that she jerks from time to time, time for blue on blue.” 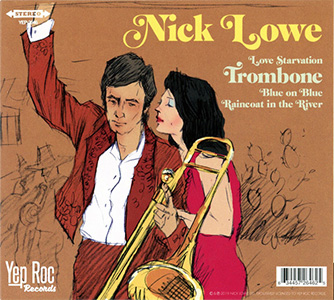 Finally, “Raincoat in the River” is a cover of an obscure 1960 Sammy Turner tune (produced by Phil Spector, later covered by Rick Nelson) that nicely defies its title with a happy story of a guy whose gal is coming back to him. The song really fits with the other three original Nick Lowe-penned songs, which is no surprise because that’s a skill that the man has had for decades, dating back to his days in Brinsley Schwarz and later with Dave Edmunds in Rockpile.

There’s no telling whether the tracks from this Love Starvation EP and the aforementioned Tokyo Bay will turn up on a long player, but it would be a pretty safe bet. I’m sure Lowe and the ’Jackets  have either recorded more than what they’ve let out or they’re cooking up more tasty treats while they tour the UK and US this summer.