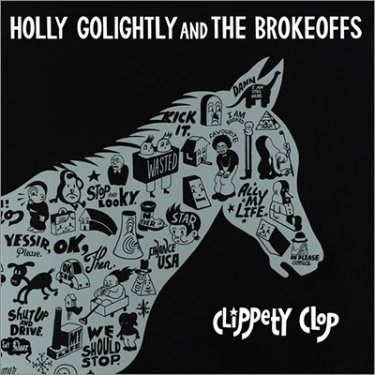 If you like yer country with all the dirt, dust ’n’ twang missing from most of today’s “country,” then you’ve probably heard of HOLLY GOLIGHTLY AND THE BROKEOFFS. Her/their new album, Clippety Clop, is a doozy. A dozen tracks built around songs about horses and mules, it’s a fun album that trots and gallops happily through alt country territory without ever leaving the stable. [Does that count as a mixed metaphor?] There are traditional songs such as “I Ride an Old Paint” and “Stewball,” and a wealth of well-known old school country tunes like “Strawberry Roan” and “Mule Skinner,” plus some fairly obscure ones that only the most hardcore of hard country fans would know.

Holly and her partner, Lawyer Dave, came up with a real cool collection here. Some of the tunes on Clippety Clop are of a typical I-IV-V blues pattern variety, while others occupy a darker place, such as “Horses in the Mines.” What’s really swell about this album is its arrangements and production. Not sounding like your usual slick Nashville or Hollywood thing, it’s of a more lo-fi, indie vibe.

Naturally distorting guitars mix with Holly and Dave’s raw vocals in a small room with none of the glitz that makes up most of today’s records, giving the songs a more authentic feel. I don’t think I heard a pedal or lap steel on here, but don’t let that get you down. This’ll appeal to not only fans of Golightly (she’s got numerous albums under her belt, both solo and as one of Thee Headcoatees, a little sister band to Billy Childish’s Thee Headcoats), but to anyone who enjoys the genuine article. Those of us who discovered alt country via college radio and No Depression magazine will take a real shine to Holly Golightly and The Brokeoffs’ “concept” album. Though Holly says it’s merely “what came out best from a batch of songs we wanted to do,” the fact that all of these songs come from the same corral makes it an even juicier apple. Horses like apples, right?