The Jazz Butcher • In Bath of Bacon [LP] 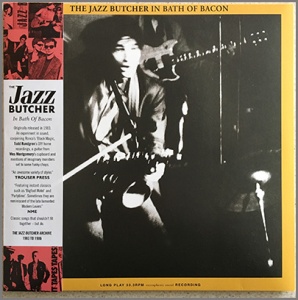 In the last few months I’ve reviewed two different box sets of albums by THE JAZZ BUTCHER. The first one, The Wasted Years, covered Pat Fish’s first four elpees under his nom de plectrum. Album number one, In Bath of Bacon, has just been reissued on vinyl for the first time since, ever?, and now I’m the proud owner of a copy. Complete with an English OBI, this vinyl treat is a glimpse at the nascent Jazz Butcher, circa 1983, fumbling towards greatness. Recorded primarily as a solo project by the man himself, the songs range from silly ditties about love kittens and girls who keep goldfish, to zombies in love, grey flannelettes and gloop jiving. What does all this mean? Well, as noted by the music press at the time, it’s “reminiscent of… the Modern Lovers,” (NME) and “[conjoins] Todd Rundgren’s DIY home recordings [with] a guitar from Wes Montgomery’s cupboard.” Together these make up a pretty apt description of the sound of Bacon.

Finding this album on vinyl has been a difficult ordeal, with original copies in decent shape fetching $25-30 easily. It was pretty obscure in the first place, at least here in the States, though it was issued at one point on CD (and even that’s been hard to find). And, while not The Jazz Butcher’s best album (I vote for Cult of the Basement or A Scandal in Bohemia), Bath of Bacon is worth checking out as a vital piece of the Butcher puzzle, especially now that you can get it either as a singular vinyl record or as part of a totally worthwhile 4CD box set. Buy it, enjoy its lo-fi charm, and then start awaiting the massive awesomeness of A Scandal in Bohemia and its return to vinyl.