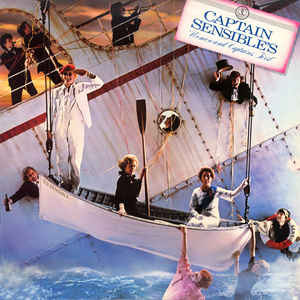 FINALLY two of the greatest albums that mix rock and “synth pop” in a way that dumbs down neither have been issued on CD. CAPTAIN SENSIBLE, sometime guitarist for my favorite band of all time, The Damned, put these two out in the early ’80s, on the heels of his surprise hit “Happy Talk” (yes, from South Pacific!), as he took his turn at becoming a pop star. He had more than his 15 minutes, at least in Britain, and of course he’s been back with his punk chums for longer than a decade now, but these A&M elpees were never put out on CD until the 2000s, first as limited edition Japanese issues (with uncharacteristically mediocre mastering), and now these superb versions on Cherry Red. Women And Captains First came out in 1982 and featured not only the aforementioned hit, but the further single “Croydon” (a sublime tune about his childhood and growing up “cleaning toilets”), “Brenda,” and my personal fave, “Wot!” (which also charted). Tony Mansfield gets the producer credit for both albums, and on the first one especially he really did a fantastic job… great pop songs bolstered by production and arrangements that really bring out the uniqueness of Captain’s take on rock ’n’ roll.

The Power of Love followed in 1984 with real great singles “Stop the World” and “I’m a Spider,” though the hits kinda trailed off. Whatever… this was another good one, though not quite as.

Cap’n went on to do more solo stuff, and eventually rejoined The Damned after former drummer Rat Scabies departed, and the band returned to former glories with 2001’s Grave Disorder. Sensible has slowed down on the release front, but hell, he did run for political office in the Blah! Party he formed in the UK, and he has been an active campaigner for animal rights and a lot more. These two slabs of early ’80s pop are proof that not everything that had a synth back then sucked.
5/5 (Women And Captains First), 3/5 (The Power of Love)
(Cherry Red CDMRED 408, 409)