First off, get over to Sugarbush Records right now and order a copy of each of these before they run out. I’ll wait for ya. Okay, now that you’re back: PUGWASH is the best Irish band since The Undertones and one of the best bands of the last two decades, period. Their first two albums, 1999’s Almond Tea and 2002’s Almanac, have been reissued in very limited editions for the first time on (colored) vinyl and they’re stunning! If you haven’t heard of Thomas Walsh’s band it’s not surprising – Pugwash is as obscure here in the States as a hot dog is in Ireland. And it’s hard to understand why, in this Internet/Wikipedia/“Google it!” age, that a cursory search of “power pop,” “Irish rock bands,” or “those guys with the big-hearted, big guy who writes the catchiest tunes this side of 1960s Liverpool” doesn’t serve up the name Pugwash. The band, fronted by Walsh and including his current, more-than-able mates Tosh Flood, Shaun McGee and Joe Fitzgerald, has had a career-spanning “best of” (A Rose in a Garden of Weeds: A Preamble Through the History of Pugwash, 2014) and a further CD released here in the States in recent years, and a new 2017 release on the way. (You can support that release on Kickstarter here.) But this is where it all started.

Almond Tea in “mint tea green” and Almanac in orange.

Almond Tea (”as served by Pugwash”) was the band’s debut release, and one of those albums that comes out of nowhere (or in this case, Dublin) with a sound that is at once of its time and of no time. Put out by now defunct Vélo Records, it was Walsh’s first fully realized project after years of making his own demos in a shed out back. This time he and his mates go all out. Their songs sometimes recall ’60s greats like The Beatles, The Kinks and The Beach Boys, plus later heroes ELO and XTC, but none of them are out and out copies. “The Finer Things in Life” (pronounced “tings” in Walsh’s particular Irish accent), a tender yet semi-rockin’ love song, recalls John Lennon with its Rubber Soul meets Double Fantasy melancholy vibe. Further songs are in a more power pop place, like “Two Wrongs” and “Missing the Point.” Throughout Almond Tea you hear references to all kinds of records in your collection.

Walsh’s talent to come up with canny concoctions continues on Almanac, Pugwash’s sophomore release (also originally released by Vélo). More upbeat than its predecessor, the band’s second LP features guitar gems like “Monorail,” “Keep Movin’ On” and “Apples,” among a harvest of other treats straight out of The Big Book of Psychedelic Psunshine Pop. Thomas’s voice is a sonorous one, equal parts nasal and not; his range and note-hitting precision is something lacking in most of today’s lead singers. There’s not a hint of gimmicky affect or studio trickery anywhere. The other band members’ voices help carry Walsh’s to a place that is seldom seen or heard anymore.

Thanks to the folks at Sugarbush Records these early Pugwash albums are available on beautiful, 180 gram colored vinyl LPs. In your choice of two colors each, they are limited to 250 copies per color and rumor is this breed is just about extinct. Considering the original CDs are also an endangered species (they fetch big bucks on Ebay), you might just want to hop to it. 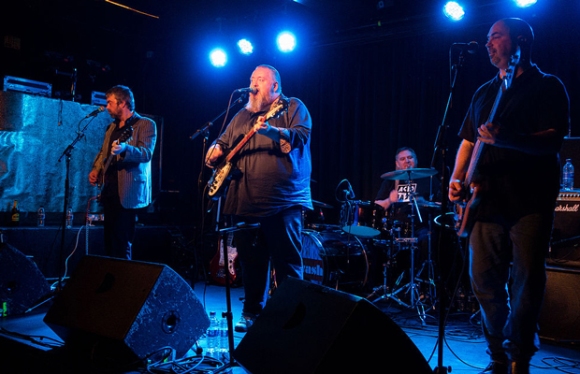