The Beatles • Live at the Hollywood Bowl [CD, LP] 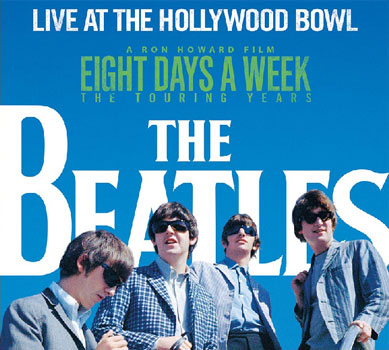 Released to coincide with the premiere of Ron Howard’s documentary, The Beatles: Eight Days a Week – The Touring Years, this reboot of the band’s sole, totally official live record is a mixed bag. Yes, I wanted to love this. I mean, I’m glad they’ve finally revisited The Beatles at the Hollywood Bowl, the 1977 record and document of the Fab Four in concert circa 1964-1965, but they did a real half-assed job of it. I understand the idea: reissue the album to coincide with the documentary, which is ostensibly about THE BEATLES as a live act, but since that original concept turned into a much wider vision, the reissued Hollywood Bowl album feels like a real after thought.

First off: the artwork for The Beatles Live at the Hollywood Bowl is horrible. While the cover image is cool and works well as the documentary’s main ad and poster image, as an album/CD cover it just looks wrong. Not that I’m overly enamored with the original cover, but it’s miles better than this new one. 1977’s release looked pretty classy as a 12″ album cover, and would look fine today. What they ended up using looks like an ad for an album, not an album.

Second, calling it “an entirely new release” is a lie. The new version contains the word ”live” in the title, which is new, but the album has the same original 13 tracks in the same order, with four more for a bonus. The sound, remixed by George Martin’s son Giles, is pretty good and punchy, but even today there’s not a lot they could do to rescue the sound quality. (The concerts were recorded on three-track tape, giving the engineers little to work with in terms of a mix.) George Martin’s 1977 version sounded pretty good, actually, and his son’s 2016 mix isn’t all that different. So, again, this reissue feels forced.

I wanted to be Mr. Positive in this review – I’ve been known to be a curmudgeon (though I thought you had to be old to be one of those!) – but I can’t help but feel they should have reissued the original with the same cover, but with updated sound and as a true “companion to the film” and not a second-thought, half-assed appendage to the documentary. That being said, I can’t wait to see the film!
3/5 (Apple/Capitol/UMe, 2016)

One thought on “The Beatles • Live at the Hollywood Bowl [CD, LP]”