The Kinks • Everybody’s in Show-Biz [2CD] 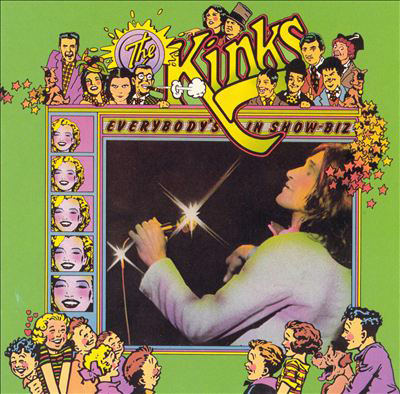 I’ll admit it. I avoided Everybody’s in Show-Biz for years for the simple reason that I thought the cover looked real cheesy. The cartoon illustration surrounding a colorized pic of Ray Davies crooning just looked so un-rock ’n’ roll that I figured the songs on it must also be that way. Now, I’ve been a fan of THE KINKS for quite awhile so it was only a matter of time before I gave the album a chance. That chance has come now, with the release of a Legacy Edition of this 1972 double album.

The original issue of Show-Biz was a 2LP affair with one record devoted to new studio tracks and the other to recent live recordings. My guess is that the record label (RCA here in the States) felt the need to bolster the new tunes with live renditions of songs already familiar to Kinks fans, as the band’s following in the US wasn’t at an all-time high. On the live record you got the addition of songs performed at New York’s Carnegie Hall in March ’72, including tunes from Muswell Hillbillies (their previous release) as well as “Lola,” which was their biggest/most recent hit. Well, if that was the idea – to add familiarity to help sell the product – it wasn’t enough to katapult the record into the upper reaches of the charts. They should’ve added more familiar live cuts to achieve that end. That, by the way, has been sorted out on this new edition, which features a further 13 live tracks including “Sunny Afternoon” and “’Till the End of the Day.” Yet, even without these great live tracks, Everybody’s in Show-Biz is a stone-cold Kinks klassic.

Ray Davies’ new tunes on Show-Biz are all of his top-shelf variety, even if you take away “Celluloid Heroes,” which is acknowledged by most to be one of the man’s best tunes. It comes last on the studio record, so you gotta listen to the other nine songs first. No problem. Drop the needle (oh, I mean, pop in the disc and hit play) on “Here Comes Yet Another Day” and enjoy the ride through “Hot Potatoes,” “Sitting in My Hotel,” and brother Dave’s “You Don’ Know My Name” and you’ll understand why I say this is as good as The Kinks Are the Village Green Preservation Society, Something Else or Arthur. Man! I love this record. The band is indeed making a transition from the garage/hard rockin’ ’60s version to a more mature one, but that doesn’t mean the songs suffer – at all. What you get here is an almost middle-aged Ray Davies sorting out the current condition of his life and career, out loud in front of you, me and everyone, with stupendous results.

Kolor me embarrassed that it took a value-priced deluxe edition for me to embrace Everybody’s in Show-Biz. For less than twenty bucks you, too, can be in show biz. Just like the ad there says.