If they left anything off of this exhaustive 3CD reissue of British band SUPERGRASS’s debut album, I Should Coco, I can’t imagine what. The band entered the Britpop sweepstakes a little on the late side with this 1995 album but they had more balls than Blur, Oasis or any of the other groups lumped into that genre that have now been forgotten by all but the most hardcore Britpop fans.

What you get here is the original 13 song album on disc one, followed by the superlative disc two that collects “demos/B-sides/out-takes/curios” including their first two (pre-Parlophone) singles, numerous B-sides and demos and a real solid idea of how this trio put together their initial repertoire. I love the kickass studio demo of “Lose It,” the cover of “Stone Free” (appeared on the 7″ single that came with initial vinyl copies of the ’95 issue and is also included in the current vinyl reissue), and the original Backbeat Records versions of “Strange Ones” and “Sitting Up Straight.” But they’re all quite good! Then there’s disc three, which is dedicated to live versions of their tunes recorded at Bath Moles in October 1994 and in France at La Route Du Rock in August 1995. You get to hear the progression from punk nutters to (slightly less punk) nutters in under a year, just before they recorded their utterly brilliant sophomore release, In It for the Money. 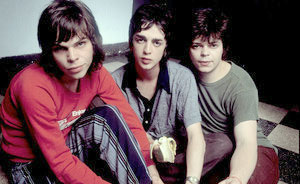 Supergrass toned down the punk rock energy after I Should Coco, and they got better despite that. Their ability to write and arrange unforgettable pop melodies was hardly bettered during the ’90s, as demonstrated by the singles “Mary,” “Seen the Light,” “Pumping on Your Stereo” and “Rush Hour Soul.”  Though they didn’t score the number of hits that their Britpop elders did, they certainly couldn’t be accused of not putting ’em out there. The public didn’t buy them and that was the public’s loss. Here in early 2016, listening to “Alright,” “Lenny” and their killer cover of “Just Dropped In (To See What Condition My Condition Was In),” I long for the times when bands wrote energetic power pop songs with king-sized hooks and I gobbled them up. Right now it seems like those days are gone, so here’s to hoping either Supergrass gets back together or somebody takes up the torch real soon!