Who is LORD SITAR? Well, he’s a man known for his sitar playing prowess who, in 1968, recorded the one and only album under his name, Lord Sitar, released originally via EMI Records labels worldwide (in the US on Capitol, in Europe on Parlophone). The LP was one of those from the mid to late ‘60s that presented instrumental arrangements of current hits in order to cash in on a current fad. Think Herb Alpert and the Tijuana Brass, or Sergio Mendes and Brasil ’66, only this time the sitar is the star. 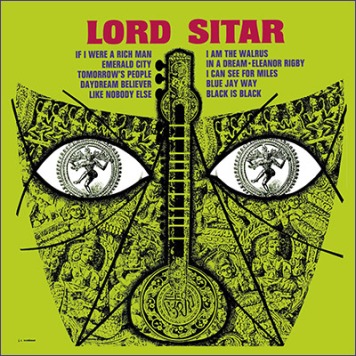 Who is Lord Sitar? He was Big Jim Sullivan (born James Tompkins), the famed English session guitarist who played on literally hundreds of records by mostly British music acts of all ilks. (See the Wikipedia entry on him.) After learning the sitar, Big Jim recorded a couple of clever sitar-based albums, the other being Sitar Beat (credited to Big Jim Sullivan). This one, reissued on 180-gram clear green vinyl for Record Store Day 2015, features covers of a handful of Beatles tunes, including “Blue Jay Way” and “I Am the Walrus,” as well as “Daydream Believer,” “Black Is Black,” and my favorite, The Who’s “I Can See for Miles.” I first heard the Lord Sitar version one day at Jive Time Records in Seattle, immediately asked who it was, and then dutifully researched it until I found a CD copy (Jive Time, alas, only had the tune on a compilation album).

You can hear “I Can See for Miles” on YouTube below.

To today’s ears the album will sound cheesy. There are spunky horn sections, fuzzed out guitar a la Neal Hefti (Batman TV series theme), crazed cellos and of course the sitar, taking the lead vocal part with its elastic, nasal tone. And let’s not forget the inevitable female background choruses (usually singing only “la la las”). 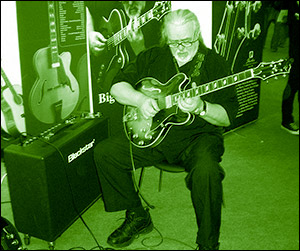 But Lord Sitar is so “of its era” that it can’t help but either make you wince at its cheese factor or smile at the enjoyable, carefree arrangements as they merrily make their way out of your speakers. One bummer: Lord Sitar also covered The Rolling Stones’ “Have You Seen Your Mother, Baby, Standing in the Shadows?”, which appeared on the single of “Black Is Black” but which wasn’t added to this reissue or previous CD issues. It’s a killer cover!

Lord Sitar—that is Big Jim Sullivan—passed away in 2012 with a discography like no one else in popular music. With over 750 charted singles and over 50 number one hits, Big Jim was more of a god than a lord.