Here’s a trio of 7” releases for RSD 2015, on the verge of yet another possible Kinks reunion, designed to get you excited for a band that continues to thrill 50+ years after they first laid noise to tape.

Kinksize Hits, an EP first released in 1965, contains only two hits: “You Really Got Me” and “All Day and All of the Night.” (Pretty big hits, I’d say!) The other two tracks barely scraped into the charts—ask most Kinks fans if they’ve heard of “It’s All Right” and “I Gotta Move” and they’d probably have to think about it for a few moments. Regardless, it’s a reissue so you can’t blame the record company. After all, they did at least get the sound quality right! 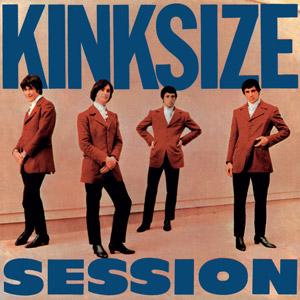 Kinksize Session came out in ’64 and features four lesser known tracks: “I’ve Gotta Go Now,” “I’ve Got That Feeling,” “Things Are Getting Better” and “Louie Louie.” This one’s actually a bit nicer because of that—the songs are ones that you’d likely skip over in any other circumstance, but they’re pretty good. (Though even I’d take The Kingsmen’s version of “Louie Louie” over this one.) The songs here are the ones that define the old cliché, here re-worded to add some freshness to this sentence, “most bands would kill to have their crap sound this great.” (I’d like to see if anyone ever puts out an EP called Kinks Krap.)  (Kinks Katastrophe?) (How about Kataklysmic Kinks?!)

The third of these releases, “You Really Got Me” (live) b/w “Milk Cow Blues” (live) is pretty superfluous. Both tracks were recorded live in a London TV studio (late ’64 and summer ’65), both sound pretty lousy, and both versions are nowhere near as good as the

studio versions. Why didn’t they just reissue another EP, like Kwyet Kinks? (That’s a real one, by the way.) If I wasn’t such a Kinks konneisseur, I’d have either passed on this one or tried to sell it back. But you know I kan’t do that!

You really got to hand it to those folks at the record label. They found that photo of me over a barrel and taped it up in the board room.